Plans for Next Phase of East West Rail Link Submitted


THE second phase of a new Oxford to Cambridge rail link could begin next year after Network Rail submitted plans to the Government.
Phase one - between Oxford and Bicester - was completed in December 2016 and the next phase, to be delivered by 2024, will see Bicester linked with Buckinghamshire.

But a decision on the route of a £3bn Oxford to Cambridge expressway, also part of a Government's growth plan for the region, has been delayed.
Campaigners have called for the road element of the plan to be scrapped or to run alongside the railway and not plough through the countryside.
County councillor, John Howson, said funding for the rail link should be prioritised ahead of the controversial £3bn expressway scheme.
He said: "East West Rail is not yet a done deal and could be at risk if other projects such as HS2 overspend.
"The Growth Board meeting next week should urge the Secretary of State to put aside funds for Phase 2 of East West Rail as a better option than an expensive road link between Oxford and Milton Keynes."
He also called for more platform space at Oxford to be included in the plans.
He said: "The project, along with the reopening of the Cowley Branch Line requires more platform space at Oxford and that requirement should be added to the Phase 2 proposals as a matter of urgency."
Peter Rutt, chairman of Expressway Action Group, which represents 38 village in Oxfordshire, welcomed the news.
But he said it was crucial the expressway corridor, which may not be chosen until September, ran alongside the railway.
He said: "It's good that rail link is moving forward, it will take a lot of pressure of the expressway and the two will complement each other.
"We feel the rail link and expressway should be broadly aligned, as was the National Infrastructure Commission's original idea.
"It should use existing roads, improving them, rather than building an expensive new road through the countryside - it would save at least £500m."
Chairman of the East West Rail consortium, councillor Mark Shaw, said: "East West Rail will drastically reduce journey times within the region, bringing key economic and cultural centres within easy reach of each other."

All submission documents can be seen here 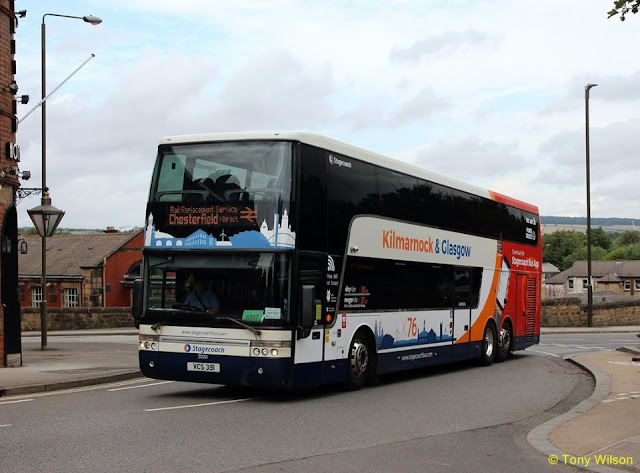 Staying with railways, the blockade of Derby Railway Station began in earnest on the 30th July, when various rail replacement bus and coach services were implemented. East Midland Trains and Cross Country Trains between Sheffield and Derby were each diverted via the Erewash Valley Line, and Stagecoach supplied a fleet of coaches for the replacement from around the empire. On the first day a couple of hours at Chesterfield Station provided photographers the splendid sight of various tri-axle double and single-deck coaches in service, which now in an album, can be viewed by clicking  here