The Transdev-led initiative is a joint investment of almost £4 million is bringing eight new high-tech “Harrogate Electrics” single deck buses to the town, after the operator became the only bus firm in Yorkshire to win funding of £2.25 million from the Government’s Low Emission Bus Scheme. 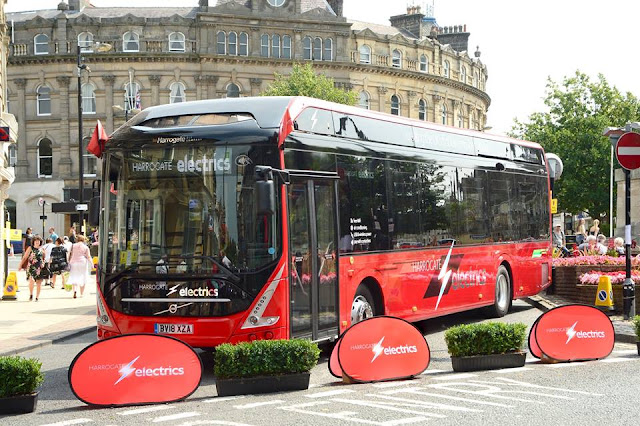 The ground-breaking fully electric buses are delivering a silent revolution in the Swedish city of Gothenburg, where they have proved so quiet in operation that a bus stop has been placed inside the city’s university library.
Now the buses, which will operate under the name “Harrogate Electrics” are to enter service for the first time in the UK next month on three urban routes in the North Yorkshire spa town, as soon as upgraded power supplies are in place.


The Harrogate Bus Company CEO Alex Hornby said: “It’s the technology which powers these new buses – using ‘opportunity charging’ via masts on three departure stands in Harrogate Bus Station – which really sets these buses apart from anything seen before in this country. We’re immensely proud to be first in the UK to introduce these amazing new buses and in the process, achieve our vision of creating Britain’s first Low Emission Bus Town right here in Harrogate.”
The company has worked closely with manufacturer Volvo on a bespoke specification for the new buses, packed with customer-friendly features including ‘countdown to departure’ destination displays, audio-visual next stop announcements, USB at seat power points, Wi-Fi and wireless mobile device charging. 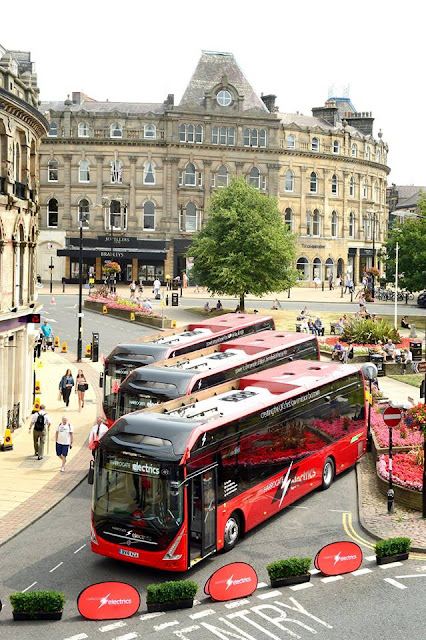 The bus company and its parent, Transdev, have worked closely with Harrogate Borough and North Yorkshire County Councils and the electricity infrastructure owner
Northern Powergrid to install the infrastructure for the new buses. Charging masts are in place above three departure stands in Harrogate Bus Station, each fitted with a built-in transformer which converts uprated power at 1600 volts AC into a 600 volts DC supply, delivered via a pantograph on the roof of the bus. In addition, each bus will receive an overnight charge at the depot every two days to maintain peak performance.
CEO Alex Hornby explains: “Each bus will receive a rapid power charge at the bus station as customers board the vehicle, providing enough power from a seven minute charge to complete 35 miles – which is ample to support the three routes on Harrogate’s urban bus network where these buses will run.
“The infrastructure providers will go live with the uprated power supply in mid-August, at which time we’ll introduce these superb new vehicles to Harrogate.”
Buses Minister Nusrat Ghani said; “I am delighted that the Harrogate Bus Company has taken advantage of the government’s Low Emission Bus Scheme and is doing its part to make motoring cleaner.
“These vehicles are an integral part of our plans to improve the air that we breathe and I look forward to seeing their rollout in further towns and cities across the country.”
Transdev was one of only 13 organisations across the country, and the only one in Yorkshire, to bid successfully for finance from the Government’s Low Emission Bus Scheme towards the cost of the buses and infrastructure. Transdev itself is investing £1.7million alongside the Department for Transport finding of £2.2million. 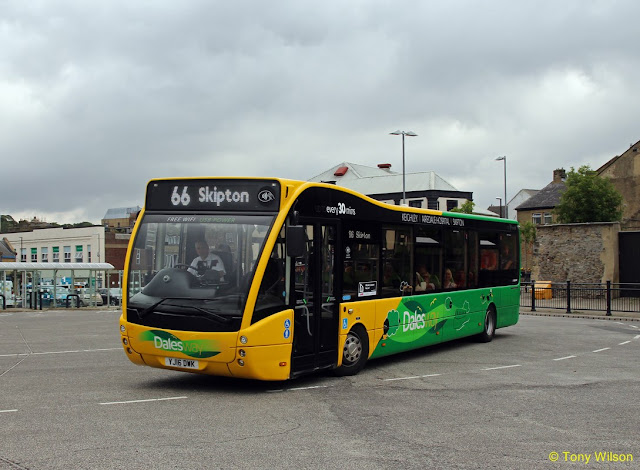 Tony Wilson recently visited the area (and missed the launch by one day !). However, twenty odd miles to the west of Harrogate along the A59 is the North Yorkshire township of Skipton, which he did visit. A selection of local buses and coaches passed before the camera's lens in and around the bus station, which have been placed into an album and can now be viewed by clicking  here