Gatwick Express must no longer claim it runs "non-stop to Victoria Station in half an hour" unless it manages it most of the time, a regulator has ruled.
The Advertising Standards Authority (ASA) said the 30-minute claim was not substantiated and was "misleading".
The watchdog's ruling followed two complaints about a poster and website.
The ASA found 20.1% of Gatwick Express trains between London Victoria and Gatwick Airport were delayed between 30 April and 26 May.
It ruled that a "significant proportion" of the delayed services during that period were due to reasons within the operator's control.
Govia Thameslink Railway, which runs Gatwick Express services, said it was difficult to mitigate against certain causes of delays, such as staff sickness. 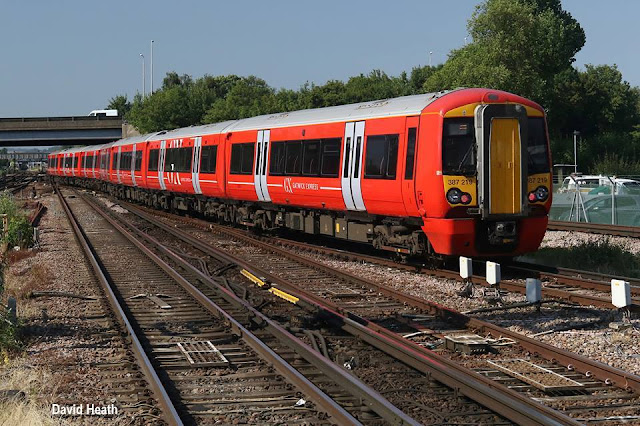 The ASA said rail travellers would expect Gatwick Express to achieve the stated journey time barring exceptional circumstances.
It said: "Whilst we acknowledged that a proportion of services were delayed due to exceptional or unforeseeable circumstances outside of Gatwick Express's control, such as track faults, fatalities and power supply failures, we considered that a significant proportion of services were delayed for reasons that were within Gatwick Express's control.
"As such, we concluded that the claims 'Non-stop to Victoria station in half an hour' and 'in just 30 minutes' had not been substantiated and were misleading."
A spokesman for Gatwick Express said: "Just a third of Gatwick Express delay minutes were within our control. However we acknowledge the ASA ruling and began withdrawing these adverts many months ago."
Last October Gatwick Express cancelled services because of the possibility of leaves on the line.
The Govia Thameslink Railway franchise also includes Southern, Thameslink and Great Northern.
The operator has suffered major disruption on certain routes in recent years caused by factors including industrial disputes, a shortage of drivers, infrastructure failures and the introduction of new timetables earlier this year.