Returning for the 11th year, the Kingsbridge Running Day on Saturday 15th September is going to include some interesting new routes as well as a different mix of vehicles for both regular and new visitors to enjoy.

Although the road closure for major causeway re-construction along Slapton Sands limits our north-east routes this year, the event will benefit from reduced through traffic so the organisers have taken the opportunity to explore new routes to the west. 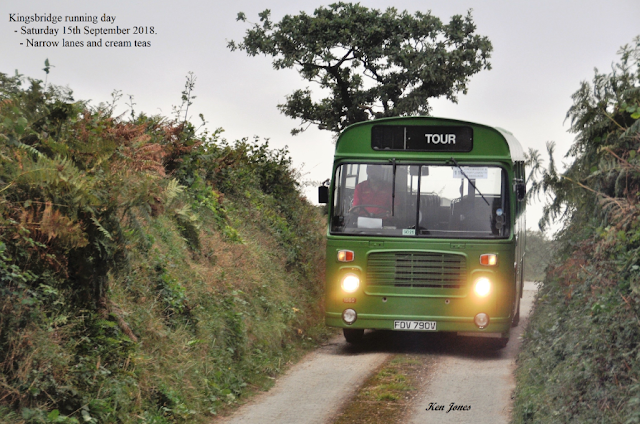 The Running Day will be centred on the recently remodelled Kingsbridge Bus Station on the Quay, operating services from 10.00 until 17.30.

The extensive network and full timetable give visitors the opportunity to ride on a range of vehicles to spectacular coast and country destinations all around Kingsbridge and the South Hams.

The routes were formerly operated by the Great Western Railway Road Motors, the Western National Omnibus Company and/or other local operators such as Tally Ho Coaches and the Coleridge Community Bus.
- Services to East Portlemouth, South Pool & Sherford, Goveton, Slapton, Salcombe, Hope Cove, Thurlestone, Bantham, Loddiswell, California Cross, Bigbury on Sea, and East Allington are being scheduled.
- Circular services will include Coleridge Community Bus operated routes from Kingsbridge to Ledstone, Goveton, East Allington, and Slapton, and from Kingsbridge to Beesands, North Hallsands and Ford.
- A new service will venture west to termini at Kingston and Ringmore.
- The circular ‘school’ service TNS004 through the Avon Valley will again be combined with pre-war rail replacement route 177 from South Brent.

Coach excursions will operate for the first time to Bigbury-on-Sea for Burgh Island - now under new ownership, The Pilchard Inn and café offer a warm welcome and spectacular coastal views. Depending on the state of the tide, access to Burgh Island will be by Sea Tractor – a new public transport experience for most.
- There will be several short workings including a town service with round trip times of less than 30 minutes so enthusiasts can sample a greater number of vehicles in the course of the day.
- A number of routes will also have duplicates so that passengers can change vehicles at outer termini.
- As in recent years, feeder services for the Kingsbridge Running Day will operate to and from Totnes Railway station, co-ordinated with connecting train and bus services. One service will also serve Ashburton and Buckfastleigh. Normal Tally Ho services will also serve the route. There will also be a feeder service from Plymouth