£2.3m Appeal to Save Waverley


Supporters of the last ocean-going paddle steamer have launched an appeal to raise £2.3m for major repairs.

The Waverley's 2019 excursion season had to be cancelled following the discovery of serious problems with its boilers.

Enthusiasts and politicians gathered at Glasgow's Pacific Quay to mark the official start of fundraising.

Named after Sir Walter Scott's debut novel, the ship was built just after World War Two as a replacement for a vessel sunk during the Dunkirk evacuation.

In 1975, at the end of its working life, it was bought for £1 by the Paddle Steamer Preservation Society.

For generations of Scots it has been a familiar sight, offering "doon the watter" trips along the west coast, carrying 130,00 passengers a year. 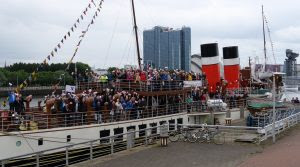 Waverley has operated on a ‘not-for-profit’ basis since 1975 and is owned by a Registered Charity (SC005832). Waverley has carried over 6 million passengers since being preserved in 1975 and visits over 60 ports and piers around the U.K. offering a variety of day, afternoon and evening cruises.

Waverley has a 4-star Scottish Tourist Board Tour Award and was nominated by the Sunday Times as “Top 3 nostalgic journey in the world”.
A recent Economic Impact Survey concluded that Waverley contributes over £5.6 million to the U.K. economy an equivalent of 136 jobs per annum.

The discovery of serious problems with the boilers earlier this year meant this is the first time since 1812 there has been no paddle steamer operating off Britain's coast.

Operators Waverley Excursions Ltd said the iconic red, white and black twin funnels would have to be lifted off, and large sections of decking removed to allow the boilers and other equipment to be lifted out.

The replacement boilers are expected to extend Waverley's operational life by a further 20 to 25 years.

The Waverley - facts and figures

Built by A. & J. Inglis of Glasgow and launched in October 1946.
Entered service with the London and North Eastern Railway in June 1947, working LNER's Firth of Clyde steamer route from Craigendoran Pier, near Helensburgh, to Arrochar.
Powered by a three-crank diagonal triple-expansion marine steam engine built by Rankin & Blackmore in Greenock.

The heavier than normal post-war construction which made provision for possible future military use as a minesweeper may have helped her stay together while she was refloated.
June 2009 - struck the breakwater at Dunoon with 700 passengers on board, 12 of whom suffered minor injuries.
Since being sold to the Paddle Steamer Preservation Society, she has carried more than five million passengers.


Paul Semple, who heads the team which operates the ship said £100,000 had been donated already to the appeal.

"We're heartened by the support so far - it's clear that huge numbers of people around Britain and around the world want to see Waverley sail again," he said.

"But the financial challenge which faces Waverley remains very significant, and we urgently need more funds to let us place the orders and then carry out the work over the next nine months."

In recent weeks, the organisers have drawing up detailed plans and costings for the repairs.

Mr Semple he was determined not to allow the ship to become a "static relic".

"Not for the first time, the future of the ship hangs in the balance. Once again, it's time to save the Waverley."