FIRST Bus have stepped up their service to Edinburgh Airport as the “bus wars” with Lothian Buses continues to rage. 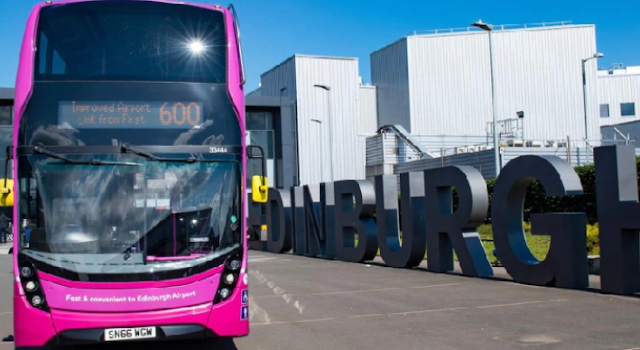 The expansion means that the service now starts at Whitburn and serves. Blackburn and Kirkton Campus as well as Livingston Centre, Deer Park, Uphall, Broxburn, Winchburgh, Kirkliston, Newbridge and Ratho Station.
The frequency of the services has doubled from hourly to every 30 minutes from Monday to Saturday.

An additional stop has been introduced at Ingliston park-and-ride site.

The existing hourly service on Sundays between Edinburgh Airport and Livingston Centre will continue.
The expanded service makes use of vehicles with extra comfort seating, free wifi, USB charging points and luggage racks.

Graeme Macfarlan, commercial director for First West Lothian, said: “We are delighted to announce the expansion of this highly popular service, which now provides more of the people of West Lothian with a direct link service to Edinburgh Airport.

“An improvement to frequency as well as an extended area coverage means there is now a viable alternative to the expensive taxi fare and I would urge people to sit back, relax and let us take them to the airport without the hassle.”

The expansion of the service was welcomed by airport bosses. Gordon Dewar, chief executive of Edinburgh Airport, said: “The improved frequency of this route shows just how successful it has been and makes it even easier for people in and around West Lothian to get to Edinburgh Airport and start that important trip, be it a business meeting in London or a family holiday in Tenerife.

“An extensive public transport programme is something we are invested in and we are always looking to add new routes, increased frequency and greater choice to ensure customers can get here with ease.
“It’s great to see First West Lothian sharing that vision and working with us to expand the 600 service.”

Lothian Buses currently operates three airport bus routes - the 100 from the city centre; the 200 from Ocean Terminal via North Edinburgh; and the 300 from Cameron Toll via West Edinburgh.
A fourth, the 400, from Fort Kinnaird via South Edinburgh is due to start on July 29.

Council-owned Lothian Buses and private sector First Bus have been engaged in an escalating conflict which has seen the two companies encroaching on each other’s traditional territory.
Lothian launched routes in West Lothian last summer through its subsidiary Lothiancountry.

First Bus is planning to begin open-top sightseeing tours which will compete with the Lothian operated routes.