Etiquette posters from the past century telling passengers how to behave on the London Underground go on display at Acton. 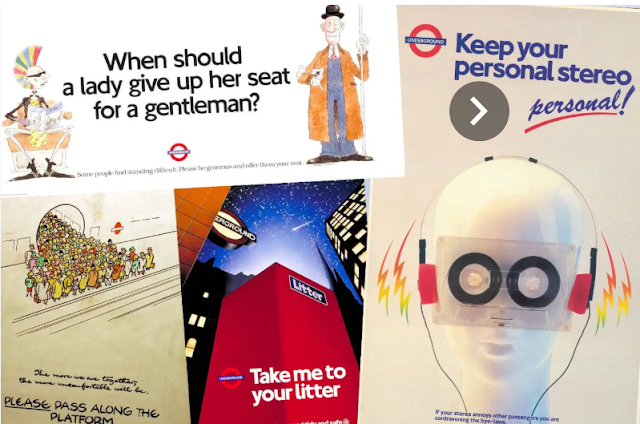 Etiquette posters from the past century nudging Londoners to keep the city moving - and not annoy other passengers - have gone on display at one of the capital’s main railway depots.

Now the museum’s collection is on show as part of a behind-the-scenes tour of the museum's Acton Town depot, with the option to view them online for free.

They show how often tongue-in-cheek illustrations were used through the ages to get messages across: give up your seat, move down the platform, don’t drop litter, stand on the left and keep the noise down.

One of the first campaigns entitled “Courtesy aids Service”, from 1946, highlights a longstanding gripe - stepping over a passenger whose legs are stretched out, albeit one with a cigarette dangling from his lips. 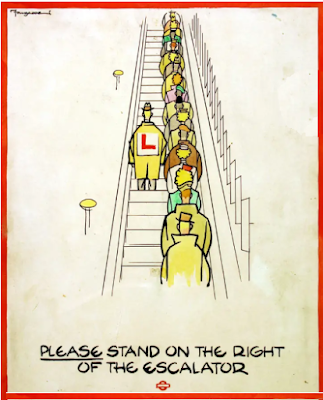 An even earlier work by Punch cartoonist Cyril Kenneth Bird shows a hapless passenger committing the cardinal sin of standing on the left, shamed with a red “learner” sign pinned to his back.

Early 20th century Tube posters emphasised the need for “fair average conduct” of passengers to keep the network moving, including passengers in 1927 being asked not to sit on the stairs.

In 1918, as overcrowding caused delays, passengers were told: “A door obstructor is a selfish person”.

While a 1970s Pink Panther-style cartoon urged top-hatted passengers on the platform: “When waiting for your train please let people off first.”

One of the most striking designs, still relevant today, is the 1987 “Keep your personal stereo personal” poster featuring classic Eighties headphones and warning: “If your stereo annoys other passengers you are contravening bye-laws”. 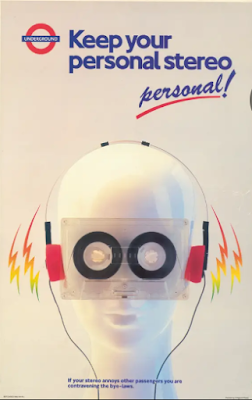 Modern-day “sodcasters” - those blasted music through their phone speakers - could still be fined up to £1,000 under the same rules.
Other striking posters include a 1986 illustration of a young punk and an old timer, with accompanying text asking: “When should a lady give up her seat for a gentleman?”.
It says: “Some people find standing difficult. Please be generous and offer them your seat.”
The illustrator, Arthur Robins, said he tried to “inject some humour” into the serious message so passengers paid attention.

Some themes were constant in the posters, such as keeping feet off seats, but others have been phased out, such as a 1997 print captioned “a small reminder” reminding people that “small children can be very vulnerable in a crowd. Please try not to push”.
Another colourful, highly-stylised 1991 artwork showing passengers holding their discarded items on the platform as Tubes bosses urged: “Please take your litter home” .

This followed a 1985 print entitled “Take me to your litter”, which asked people to “help keep the Underground tidy and safe” and showed a red rectangular bin of the kind that was removed from the network after an IRA bomb at Victoria station in 1991 killed one person and injured 38.

Mark Evers, Transport for London’s chief customer officer who runs modern poster campaigns, said: “We’ve got a constant education role alongside this reminder of what is common courtesy and being respectful of your fellow passengers.”

A London Transport Museum spokeswoman said: “Guided tours of the depot in Acton Town give people the chance to go behind-the-scenes of its art and poster store, revealing the history of London Underground poster commissioning, from its roots in 1908 to later collaborations with a diverse group of renowned artists.”