A SPECIAL train has smashed the record for the quickest journey between Oxford and London Paddington.

GWR's bullet style train completed the journey in just 37 minutes 35 seconds in a non-stop run to mark the 175th anniversary of the Oxford to Didcot line. 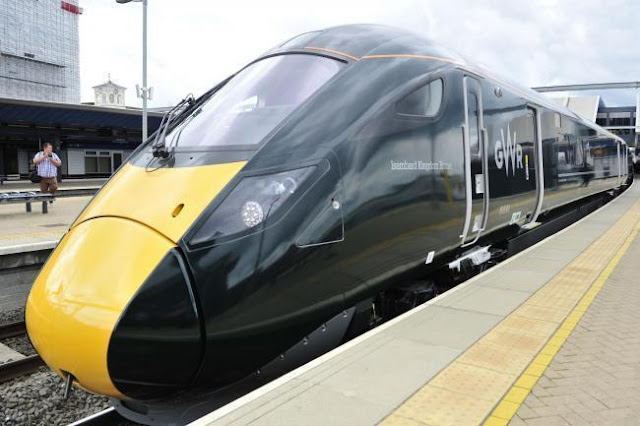 The service left Oxford at 11.27am and beat the previous record, set in 1982 during a state visit, by more than three minutes.

A special journey from London Paddington to Oxford marked the opening of the line back in 1844, with the record attempt part of GWR's celebrations to mark the milestone.


The IET 'bullet style' Intercity Express Trains have been in service since October 2017 and now operate on all of GWR’s long distance routes.

Laurence Waters, a photo archivist at Didcot Railway Centre, was one of the special guests on board.

The Cumnor resident said: "The highlight was passing through Reading at 95mph.

"It was quite amazing getting in that quickly - they really put on a show."

He said: "Today’s non-stop journey shows just what these Intercity Express Trains (IET) are capable of.

“They have been in service for over a year now, every day providing thousands more seats between Oxford and London Paddington than the trains they have replaced.

“This December sees the biggest timetable change in 40 years on the GWR network and the timing of almost every single train we run will be different.


"The IETs will be critical to us delivering even more frequent services, quicker journeys and around 1,000 extra seats a day along the North Cotswolds line.”

Network Rail head of strategic planning western, David Tunley, added: “Investment in the rail infrastructure is allowing for significant improvements. Beating this record today shows what is possible, and we will continue to work with GWR to deliver timetable and journey time improvements in December.”

The IETs began operating between London and Oxford in December 2017, with the nine and 10-carriage trains boasting an average of 100 more seats than the High Speed Trains they replaced.

As well as today's special train, there will be a day of events on the line between Didcot and Oxford on Saturday.

STEAM train journeys have been organised to celebrate the 175th anniversary of the opening of the Didcot to Oxford branch line.

There were two special rail tours in June, organised by Vintage Trains.

'Clun Castle' locomotive was scheduled to run from Birmingham to Oxford via Dorridge, Warwick and Banbury.

The train was scheduled to do a very special lunchtime circular, from Oxford through Radley, Culham, Appleford, Didcot, Reading, Slough and Southall, and then back via Bicester and Islip.

The Didcot to Oxford Branch of the Great Western Railway opened in June 1844, marking the first time commuters could reach London by train.

Its opening caused enormous excitement and great crowds gathered in areas adjacent to the railway.

The rail connection came late to Oxford, mainly due to opposition from the university which feared for the morals of its students.

In particular it was very worried about providing undergraduates with easy access to London, where they might be involved in 'improper marriages and other illegitimate connexions.'