British Airways (BA, London Heathrow) took delivery of its maiden A350-1000 on July 26, 2019. G-XWBA (msn 326) was ferried directly from Toulouse Blagnac to London Heathrow via Châteauroux.

The A350 will initially operate the Heathrow to Madrid route from the beginning of August to allow for crew familiarization and training. It will then start long haul services to Dubai and Toronto before beginning flights to Tel Aviv and Bangalore on either side of the new year.

The British flag carrier will operate its first flight with the A350-1000 to Dubai on September 2nd. Starting on October 1, it also plans to deploy the type to Toronto Pearson.


The aircraft boasts many technological advances, which will make for significant improvements to passenger comfort in-flight. The air inside the cabin will be refreshed every two-to-three minutes, as well as improved levels of humidity.
There will also be improvements to the cabin pressure, which will be similar to that of the pressure experience at an altitude of 6,000 feet.


Other improvements to the atmosphere inside the cabin include 16.7 million variations of ambient lighting, designed to complement the time of day and the level of light outside, which should help to combat the effects of jet lag. 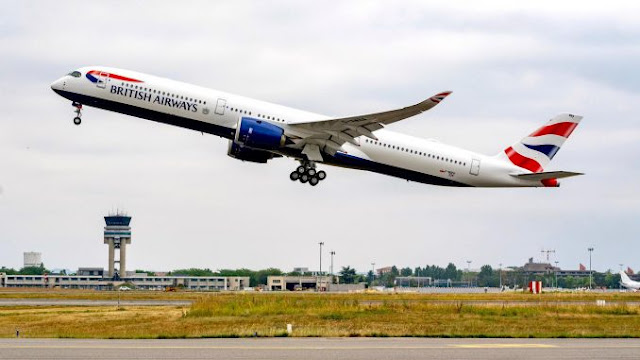 The remaining 17 deliveries of the A350 will continue over the next three years with all 18 to be with the airline by the end of 2022.