Wales' first electric bus will start work on the roads of Newport this week.

Newport Transport has bought a former Yutong E12LF demonstration bus which will be the first in Wales to be used on a permanent basis.

The city, along with Cardiff and Caerphilly, has won grant funding from a UK government grant scheme to promote greener public transport.

£8.5m worth of UK government funding following trials last year. The money comes from a £48m Department of Transport grant scheme to promote greener public transport across England and Wales.
Cardiff will have a fleet of 36 buses, while Stagecoach will have 16 for its Caerphilly depot.

Newport Transport has been awarded just under £1m to fund the first electric bus.

It follows electric bus trials in Cardiff which began in 2018. 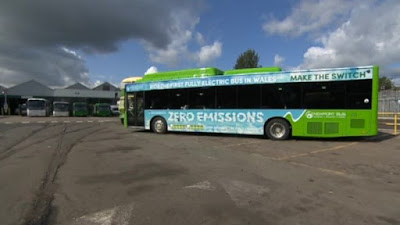 Newport's first electric bus  has been supplied by Yutong and is three years old and cost £250,000 compared with the £340,000 cost of buying the vehicles new.

The buses' batteries need to be replaced every six years and cost £150,000 but Newport Transport has a deal with the energy company Zenobe. Like Abellio with its newly-announced Caetano electric fleet in London, the Yutong’s batteries will be owned and maintained by Zenobe.

Charging will be taken care of at the Newport depot overnight, when the bus is not needed in service. .

The company continues to own and maintain the batteries and charging systems, and Newport Transport effectively buys the energy off them.

The bus can travel 116 miles (187km) in one charge which the company says will be more than enough for a day's driving.


Morgan Stevens, operations director at Newport Transport, said: "It improves the quality of experience the passengers will have on the bus.

"It's a lot quieter - there's a lot less noise, a lot less vibrations on the engine - which will improve the passenger experience on short and long-distance journeys."

"The Welsh Government has already declared a climate emergency [and] there are a number of poor air quality zones in Newport that need to be addressed," he said.

"So the first electric vehicles are going to go on one of those routes - that's Caerleon and back - that's got three poor air quality zones in it."

"With the M4 relief road now not being built, I think bus can offer that alternative of mass transportation and if we do it with electric vehicles, it ticks so many boxes.