The frustration of waiting for someone to put their bag in an overhead locker may soon be over if a trial to get people on planes quicker is successful.

Gatwick says it is working with EasyJet to try out new ways to board passengers at the London airport.

They include boarding people in window seats first, starting at the back, followed by middle then aisle seats. 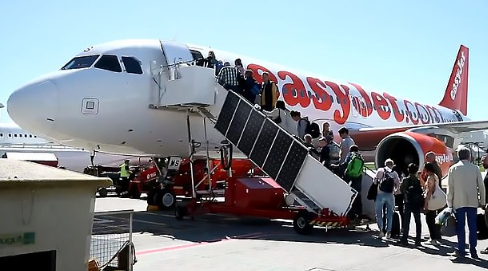 Gatwick said different boarding methods could reduce the journey from airport gate to seat by about 10%.

The airport operator says that the window-to-aisle seat pattern of boarding is best suited for individuals and business passengers.

Groups of people who want to sit together such as families will be seated by row, again starting at the back of the plane.

Gatwick said it was experimenting with flexible boarding patterns, "depending on the passenger make up on any individual flight - number of families, individual travellers etc".


The two-month trial has already begun and Gatwick said an airline managed to board 158 passengers on one plane in 14 minutes. "This is typically 2-3 minutes better than the usual time," said a spokesman,companies are experimenting with plane seating - most notably Japan Airlines which has introduced a new booking system which helps passengers avoid sitting next to young children, thereby potentially avoiding a noisy flight.
'Bingo boarding'

Gatwick is also experimenting with better ways of telling passengers when they need to queue up at the boarding gate.

Instead of the often inaudible tannoy announcement informing which rows of passengers to line up, flyers will now learn which seat numbers are ready to board via a digital screen. 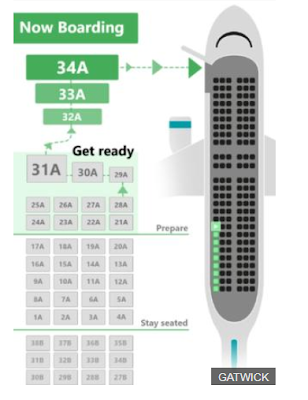 A spokesman for Gatwick said: "One challenge in any controlled boarding process is our ability to communicate the pattern to passengers and the willingness of passengers to comply. It is almost impossible to do that effectively through audio announcements."
He said that so far passengers "get it intuitively and comply with it".
"Passengers can be seated until their seat number comes up on the large screen and then board the aircraft without queuing.
"Some even appear to enjoy it and are calling it 'bingo boarding'."
The company said the trial was being run with EasyJet from just one gate at present, but other airlines are expected to become involved.
It said: "This is about improving the experience for passengers - not just in terms of making the boarding process more relaxing - but also helping to reduce delays."
Passengers who have booked priority boarding, or those who require special assistance or are travelling with young families, will still board first during the trial.