Stagecoach Merseyside has once again rolled out its ‘poppy bus’ onto the streets of Merseyside ahead as part of the 2019 Remembrance Activities.


Redesigned for 2019, the commemorative vehicle features two photographs of real war heroes who contributed to Britain’s victory in World War II, and highlights the male and female efforts at home and on the front throughout the World Wars.

Stagecoach Merseyside, Cheshire and South Lancashire’s striking remembrance bus has been an annual feature since 2017, when the company announced its partnership with The Royal British Legion.

The images were both chosen from the Imperial War Museum’s archive photo collection. Created by graphic designer, Chris Sankey, the bus design and photographs used are intended to celebrate and honour the sacrifices and bravery shown by ordinary people during war time.

The first image depicts soldiers in the trenches at The Battle of Crete, 1941 – the scene of the

largest German airborne operation of World War II. The battle was the first time the Allies had advance notice of a major German offensive due to intercepted Enigma transmissions. The Battle of Crete is also famous due to the remarkable bravery shown by the Cretan civilian resistance.

The second photograph being showcased on the Remembrance Bus features Irene Stacey from Bristol at her workbench in a UK factory. The image signifies the vital home effort led by British women who supported the front line by taking jobs in transport, engineering, mills and factories to keep the country moving throughout the war.

Rob Jones, managing director at Stagecoach MCSL said: “We are incredibly proud to be marking Remembrance Sunday and honouring the brave men and women who served at home and abroad to defend the freedoms of Britain and our allies.

“Our new bus design is a tribute of recognition and appreciation for the unparalleled sacrifices made by the men fighting on the front line and the women leading the support effort back in the UK.

“Many of our team across the region have joined us from careers in the forces and our partnership with The Royal British Legion is incredibly important to us. Their work in supporting and caring for our veterans and Serving personnel is unparalleled, and it is only right that we support them in this important endeavour.”


Stagecoach South West is once again showing its support for military personnel past and present. As part of the company’s activities to commemorate the contribution of British and Commonwealth military and civilian servicemen and women, Stagecoach South West will be covering one of its buses in an eye-catching poppy design, while the rest of the fleet will have poppies on display.

In addition, the bus company has also made a contribution to the Royal British Legion, giving all drivers the opportunity to wear a poppy.

Remembrance Sunday is a day to commemorate the contribution of British and Commonwealth military and civilian servicemen and women in the two World Wars and later conflicts and to remember and honor those who have sacrificed themselves to secure and protect our freedom. With Remembrance services planned at memorials across the county, it is hoped that personnel wishing to pay their respects will take up the offer to travel to the service of their choice.


“We are proud to be supporting armed forces personnel and veterans, by offering free bus travel on Remembrance Sunday. We appreciate and recognise the commitment the Armed Forces community has made to our country over the years and are delighted to be honoring our brave servicemen and women with the launch of our decorative poppy bus.”

Stagecoach Group signed the Ministry of Defence’s Armed Forces Corporate Covenant in support of the Armed Forces Community in 2017. As a signatory of the Covenant, the company recognises the value serving personnel; regular and reservists, veterans and military families contribute to both the country and businesses across the country.

Below, spotted in Honiton, Devon on 7th November 2019 were Stagecoach vehicles carrying the poppy emblem. 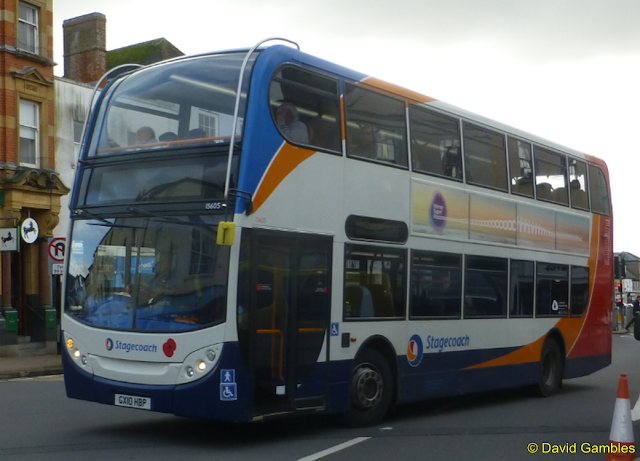