The steel truss structure that spans 80m was constructed offline and installed over Airport Way, the main road into the terminal area.

The bridge was constructed offline, and driven 500m down the A1081 dual carriageway and lifted onto abutments on either side of the road. 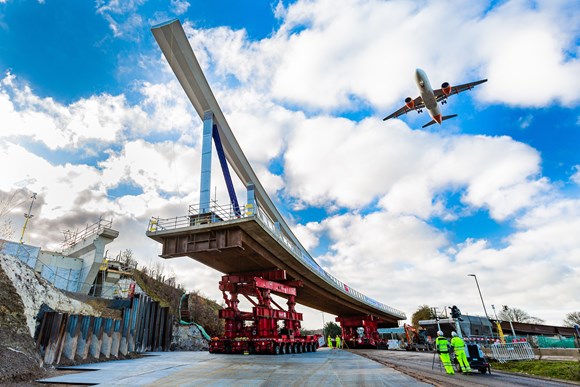 London Luton Airport Ltd programme delivery director Ciaran Scanlon said: “This has been an exciting achievement and a hugely significant milestone in the delivery of the innovative DART scheme.

“The whole project has been full of engineering challenges and to move an object of this size ranks as one of the biggest. To see such a large object calmly trundle down the A1081 under complete control was a great testimony to both the vision of the project and the technical expertise of our contractor, Volker Fitzpatrick Kier (VFK).”

Once operational in 2021, the £225M Luton Dart will transport travellers from Luton Airport Parkway station to the terminal of London Luton Airport in under four minutes.

DART will be a double-shuttle, fully-automated people-mover (APM) based on latest system technology and design innovation, and capable of operating 24 hours a day, seven days a week. The cable-driven system is energy efficient and environmentally friendly.

The 2.1km route will run between two purpose-built stations at Bartlett Square and the airport terminal, crossing a new gateway bridge over Airport Way. In peak time, a service will leave each station every four minutes.

It will allow passengers to travel between St Pancras and London Luton Airport in just 30 minutes. 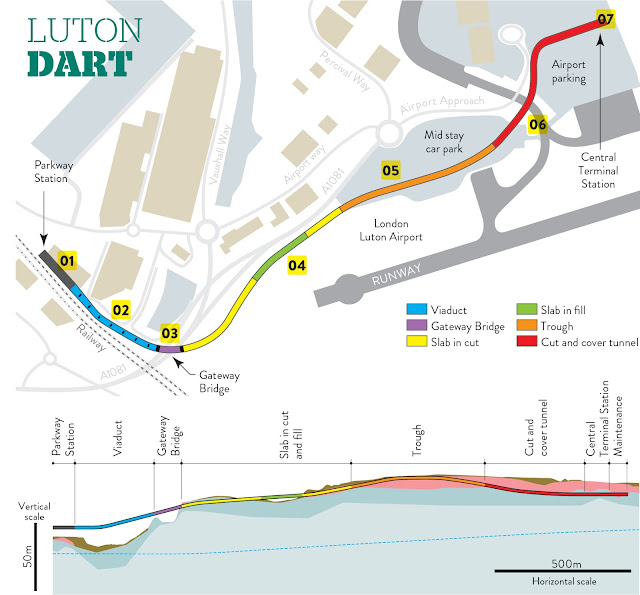 VFK project director at the Luton Dart Phil Hobson added: “This was an especially challenging project milestone to reach and required a huge collaborative effort between all parties. The team worked incredibly well together to successfully install the bridge.

“Every aspect of the installation was specialised and complex. From setting up the temporary ramps to moving the bridge, which took us over two hours. Each operation over the weekend was expertly planned and we are really pleased to have reached this vital point in construction of the project.”

The 1,000t asymmetric Gateway Bridge, designed by Knight Architects, has a structural truss in the central spine, the top chord of which traces a parabola rising from the deck. The spine is designed to take the live load when a train passes over the bridge.

The project is being funded and delivered by Luton Council’s airport company, London Luton Airport Ltd.

The scheme design was carried out by Arup, and Doppelmayr Cable Car is supplying the cable-driven autonomous transportation system, which was selected for its low environmental impact.