Brighton & Hove Bus Prices To Rise Due to Traffic Delays


The cost of tickets for many Brighton and Hove Buses’ services are set to rise due to a “sizeable growth in traffic and congestion in the city centre”. 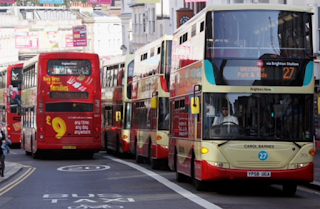 A spokeswoman for the company said: “The sizeable growth in traffic and congestion, particularly in the city centre, had also meant extra cost pressures which had outpaced bus lanes and other bus priority measures.

“For example, it takes a route seven bus 31 per cent longer to get from Hove to Brighton Marina than it did ten years ago.

“Maintaining the same high level of frequency on this route alone costs more than £1 million each year for extra buses and drivers.

Brighton and Hove Buses’ managing director Martin Harris said:
“We’ve brought in cheaper short hop fares in response to feedback from passengers and we’ve done our best to keep other ticket prices frozen or to make only minimal increases to cover the costs of the business


“The company runs 24 other bus routes in Brighton and Hove.”


Longer adult single journeys, which can currently be bought for £2.20, will soon cost 10p more.

The price of a one-day citySAVER tickets, which gives the holder unlimited travel within the city for 24 hours, will rise to £5.20, a 20p increase.


The annual citySAVER will also see a price hike of more than £30, now costing £669.

Meanwhile, the annual networkSAVER ticket, which gives holders unlimited travel on routes stretching to Shoreham, Eastbourne and Tunbridge Wells, has risen by more than £35. 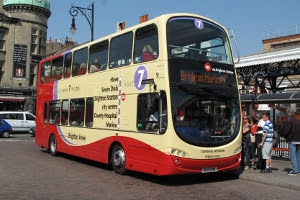 However, the bus company is dropping some of its prices.

Short journeys on many routes, including journeys between Brighton Station, Churchill Square, the Clock Tower, North Street, Old Steine and St James’s Street, will fall from £2.20 to £1.90.

Short journeys outside the city centre, including trips from Mile Oak to Portslade Health Centre and Whitehawk to Lidl, will also go down.

Brighton and Hove Buses’ managing director Martin Harris said: “We’ve brought in cheaper short hop fares in response to feedback from passengers and we’ve done our best to keep other ticket prices frozen or to make only minimal increases to cover the costs of the business.

“Much of this went on 30 new extended-range electric buses, which run zero emissions in the city’s Ultra Low Emissions Zone.

“It’s part of our ongoing commitment to creating a clean air city centre for everyone by 2030 and we won’t shy away from this commitment. We’ll keep refreshing our fleet to the highest environmental standards.”

Return tickets from Lewes, Seaford and Newhaven to Brighton are also frozen at £5.