Council-run Halton Transport has gone into liquidation after seeing losses rise by more than 1100% in two years. 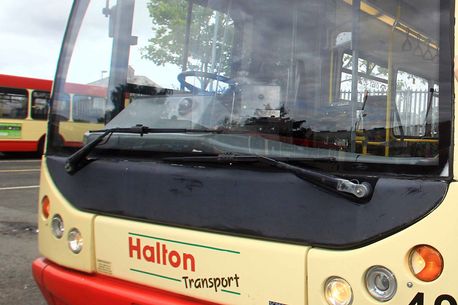 Halton Borough Council said it tried to give the firm a "stronger, more sustainable footing" but had failed.
It said the "simple advice" to people who rely on Halton Transport services was to "make alternative arrangements".
The move, which has put 150 jobs at risk, came after the company had to be bailed out with a £750,000 loan from the council in 2019.
A council spokeswoman said the authority was working with other bus providers to ensure essential services are maintained but added that there would be "inevitably be disruption".
Passenger watchdog Transport Focus said it was "vital" local authorities and bus operators reduced the immediate impact on passengers.

Arriva North West announced on its website that it would take over some of the firm's routes, while Liverpool City Region Mayor Steve Rotheram said all Merseytravel-funded school routes would continue to run.

The firm has been run as an "arm's length" company by the council since 1986, when the introduction of the Transport Act made it illegal for councils to directly run bus companies.
Halton Council, which faced a £6m funding gap in 2020, said a "difficult" trading environment and council budget cuts had led to the firm's demise.
"As the major shareholder, the council has been supporting the company in an attempt to place it on a stronger, more sustainable footing [but] unfortunately that has not been possible," the spokeswoman said.
She said the council had had "significant reductions in its budget" and had to make "difficult choices" going forward, meaning that its "ability to support a commercial operation like Halton Transport is limited".
She added that the "simple advice to members of the public is that if you rely on a Halton Transport bus, you should make alternative arrangements".
"The council would like to apologise to bus users for any inconvenience caused and will continue to try to arrange alternative services."

He added that while the Transport Act had "legally prevented" the combined authority from buying Halton Transport, his aim was to "minimise the impact for local people as much as possible".
"Other bus operators will be taking over services and we understand that they are actively recruiting drivers previously employed by Halton Transport," he added.
Transport Focus director David Sidebottom said buses were the "only real means of transport available to many people", so it was important that authorities and bus operators worked out "a longer term plan to provide services that local residents demand".
.