The company said it is a first step towards investing in zero carbon technology, to combat climate change and improve air quality. 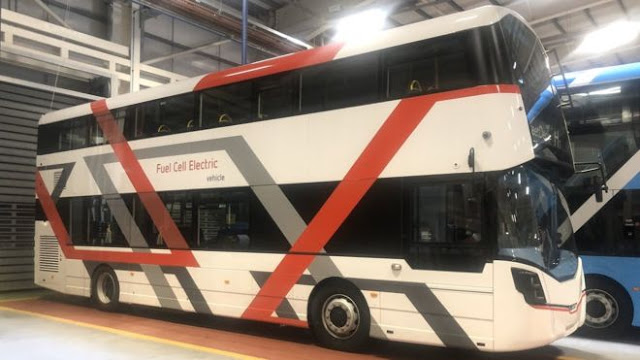 The £4m investment in three buses is being supported by the government's Office for Low Emission Vehicles.

The buses have been built by Ballymena-based Wrightbus and the hydrogen is produced by windfarm operator Energia.

"It demonstrates how working together and as individuals we can play our part in delivering the ambitions of the Northern Ireland executive to reduce greenhouse gas emissions and improve air quality," she said.

Energia will own and operate the hydrogen fuelling station in Belfast.

Water is the only exhaust emission from hydrogen-fuelled vehicles.

Translink already has some electric-hybrid buses in its fleet and the company's chief executive Chris Conway said it plans to pilot some fully-electric vehicles next year.

Mr Conway said hydrogen buses can be refuelled quickly and can operate on Belfast metro routes all day.

"This is about investing for the future and making sure we select the right technologies for the different routes we have across the network."


The owner of Ballymena manufacturer Wrightbus has said he hopes to win government funding to extend its technology for hydrogen-fuelled buses.

Jo Bamford said he needed a windfarm to help develop Wrightbus's technology for building the buses which - along with batteries - are one of two options for zero-emissions buses.

Mr Bamford, whose father is the chairman of manufacturing giant JCB, paid £6m to buy the famous Northern Ireland business after it collapsed into administration last year with debts of £60m.

The Wrightbus executive chairman was in Belfast yesterday to launch the pilot project for fuel cell electric double-decker buses powered by hydrogen.