Following the recent successful first flight of the world's largest twin-engine jetliner, Boeing are moving forward to prepare the plane for public service in 2021. 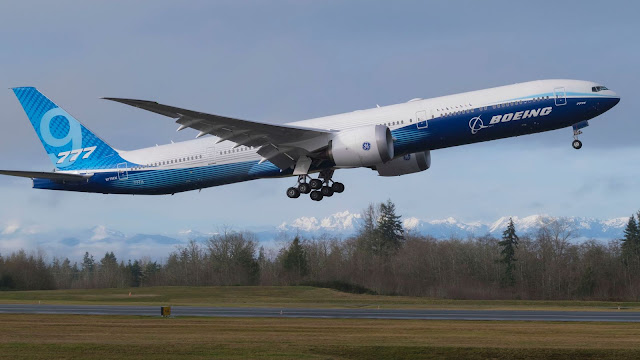 The plane - which is 77m (252ft) long and can seat more than 400 passengers - took off from a runway just outside Seattle on the US west coast.


The new Boeing model, which will be officially known as the 777-9, also boasts folding wingtips that mean it can fit its wings into the same parking bays as other jets.

Both versions of the 777X planes have the same wingspan: a manageable 65 metres on the ground, but a super-efficient 72 metres in the air. Longer wings should mean more weight, but the 777X’s are made of a composite material so its weight is more than made up for by the increased efficiency of the larger wingspan.

“They’re looking at up to a five percent reduction in fuel burn because of that, which is huge,” says Mudassir Lone, senior lecturer in Flight Dynamics at Cranfield University, who has spent the past six years working on foldable wings.
The increased efficiency is positive from an environmental perspective, but it’s also good for business. According to Boeing, “the 777-9 will have the lowest operating cost per seat of any commercial airplane.”

The plane will go head-to-head with the Airbus A350-1000 which seats about 360 passengers.

About the Boeing 777X

Following the successful maiden voyage, Boeing executive Stan Deal said: "It's a proud day for us. It made all of our employees proud one more time of who we are and what we get to do, by flying a brand-new aeroplane that is going to change the world one more time."


Boeing's new 777X is expected to enter service in 2021 - with development issues meaning this is a year later than planned. Each plane is worth an estimated $442m (£338m).

GE Aviation built a new engine for the 777X series. The GE9X is the most powerful jet engine in the world and GE’s most fuel efficient.
Like the planes it was made for, it’s massive, but also lighter than its predecessor – the GE90, which was designed for the 777. That doesn’t mean it has lost any power though. In fact, the GE9X was designed to generate 100,000lbs of thrust – that’s more than America’s first manned space flight.