The original was scrapped in 1968, before the preservation movement had taken notice of historically important diesel locomotives. 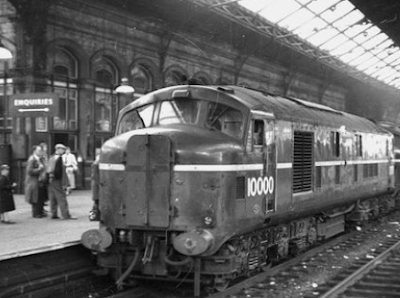 LMS 10000 and 10001 were the ancestors of all current British mainline diesel locomotives. Designed by H. G. Ivatt and built by the London Midland and Scottish Railway at its Derby works in 1947, they proved many parts and concepts that are still in use on the railway network today.

The recreated 10000 will utilise equipment that is available, proven and is adequate for the locomotive to operate beyond its proposed sphere of operation.

Due to the complexities and cost involved in exactly replicating the original electrical, brake and cooling systems, the society have been advised to utilise Brush power equipment, as fitted to class 56 and 58 diesel locomotives.

Not only is this equipment more than up to the job, it greatly simplifies the fitting out process, and minimises the amount of rewiring of the loco that will be required. The use of this equipment has the added bonus of reliability, as the power equipment being used is rated well above the 2000bhp maximum theoretical crankshaft output of the 16SVT engine.


The Class 58 chassis is very similar in design to Ivatt’s original design for 10000, although considerably more robust and with the benefit of a proven track record on Network Rail. The chassis will be modified to provide a greater degree of structural strength, but also increase its weight.

The primary modifications that will be made to the chassis are the inclusion of cross stretchers to accept EM2 type bogie pivots and transfer the weight of the body onto the bogies via traditional bogie bolster pads to the EM2 design.
The chassis height will be higher than it was on 10000, as the class 58 chassis height will be maintained. This will create additional space between the bogies and the chassis, which removes the need for a cab floor that is higher than the chassis itself, thereby saving weight.

An original 1947 Mk1 16SVT English Electric engine has been acquired with very low hours. This engine, vital to the project, has been kept in secure storage, protected from the weather but has now been moved to Centenary Works, in Wirksworth.
The move was completed on Friday 28th February 2020 despite sleet showers by Storm Jorge.
Built by LMS and English Electric in 1947, the 16SVT mk1 engine was initially built for use in an Australian locomotive, but the order was cancelled before delivery was made.
It spent several years barely used as a backup generator at a military base.


The intention is to build and maintain the loco to a high level and to a well-documented standard will ensure that the finished loco is fully fit for purpose and is as safe to operate on a rail system both light rail and mainline as any other rail vehicle.