First Order for Mireo Plus B Battery EMUs


The German Baden-Württemberg’s rolling stock body SFBW has ordered 20 battery-equipped Mireo Plus B electric multiple-units from Siemens Mobility, which will then be responsible for their availability over a 29½-year operating life. 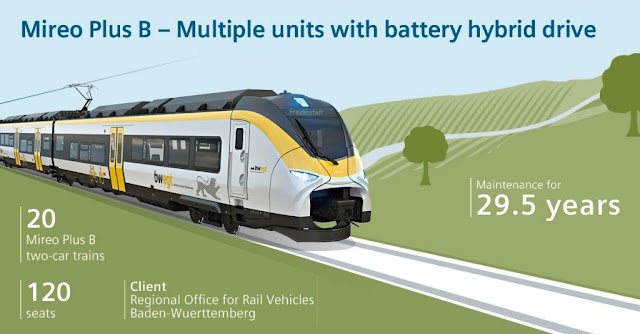 The two-car EMUs with 120 seats are to be deployed on Netz 8 Ortenau services, running on 15 kV 16·7 Hz electrification where available and using battery power on non-electrified routes.

‘This marks the first time battery-powered trains will be used in the Land’, said Baden-Württemberg’s Minister for Transport Winfried Hermann when the order was announced on March 17. ‘With this innovative technology, the electrification of rail routes without continuous overhead power lines will also be possible.’ The lithium-ion batteries will be mounted in two underfloor containers. They will be used to capture regenerated braking energy and topped up from the overhead line while the trains are operating on electrified sections. The batteries are expected provide a range of around 80 km under real-world conditions.

‘Baden-Württemberg is investing in the future of mobility’, said Sabrina Soussan, CEO of Siemens Mobility. ‘Our battery-powered train Mireo Plus B makes climate-friendly, locally emission-free passenger transport possible, thus offering a sustainable alternative to the use of diesel-powered trains on non-electrified routes.’

The Netz 8 Ortenau operating contract covers the electrified route from Offenburg to Freudenstadt/Hornberg, and the non-electrified branches from Appenweier to Bad Griesbach, Achern to Ottenhöfen and Biberach to Oberharmersbach-Riersbach. This contract will run for 13 years from December 2022, covering the operation of 2·1 million train-km/year.

The EMUs are scheduled to be delivered from Siemens Mobility’s Krefeld factory by December 2023.


The EMUs are being procured through what the Land has branded the ‘Netz Ortenau model’. Under this approach, SFBW directly orders the rolling stock required to operate tendered regional passenger services, financing the purchase through loans backed by a Land guarantee. It will own the vehicles and make them available to the selected operator for the duration of its contract.

This is a change from the ‘Baden-Württemberg model’ where the rolling stock is procured by the operator, but on delivery ownership is transferred to SFBW which then leases the vehicles back to the operator for the duration of its contract.

KfW IPEX Bank is financing the initial order under a deal worth €77m over 28 years. ‘The financing not only contributes to an immediate reduction in CO2 emissions, but also promotes innovative and climate-friendly technologies in rail transport’, said Andreas Ufer, Managing Director of KfW IPEX Bank. The bank was ‘underscoring its commitment to using such technologies in Germany and Europe’, he added.

As well as supplying the vehicles, the manufacturer will be responsible for their availability.

‘In the interest of sustainability, we’ve deliberately opted for a life-cycle model’, explained Hermann. ‘We’re breaking new ground in converting to climate-friendly propulsion systems in local transport by introducing this new technology and want to commit the company to this technology through contractual arrangements. Siemens is also responsible for energy consumption and energy costs over the entire contract period of 29½ years. In this respect, we are entering new territory regarding public transport tenders in the state of Baden-Württemberg.’