By Class 37 to Great Yarmouth, eventually.

Why I developed an illogical desire to travel from Norwich to Great Yarmouth and back behind a pair of English Electric Class 37s is a mystery to me? I had countless opportunities to ride behind them in service when they were commonplace and didn’t ever bother and when on the Great Central Railway, for safety reasons in a long dry spell, one turned up hauling a departure that I’d specially booked because it was steam hauled, I admit I was somewhat non-plussed.
As a young spotter I always liked the class, I had a Hornby one in green on my model railway, but you didn’t see a lot of them in the West Midlands in the early 1970s, it was all Peaks, Brush type 4s and Class 25 BoBos.

Over the past couple of years, babysitting for my partner’s grandchildren has taken me not infrequently to Norwich. When waiting for the train home I couldn’t resist taking a few photographs of the noisy dinosaurs, already well over 50 years old, that sat throbbing on the far side of the station.
There was something utterly ludicrous about having two type three locomotives sandwiching a mere three Mark 2 carriages, well it can’t be efficient or ecological can it?
I was aware when taking my pictures that I was far from the only person doing so, in fact it appeared that enthusiasts were as numerous as those with a conventional need to use the service.

One March Monday morning earlier this year I determined to set off early from Stamford, take the return trip to Great Yarmouth or Lowestoft (the destination was irrelevant, I wasn’t planning to leave the station) and then go about my normal duties in Norwich thereafter. All went well until I arrived at Norwich and saw the rail replacement bus signs. 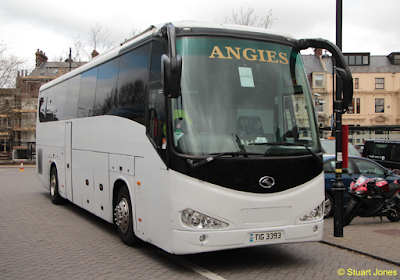 I’d managed to pick the day they had started installing the new signalling equipment to replace the semaphores, so I didn’t bother buying a ticket to catch a Chinese built coach to somewhere I didn’t need to go.

At the same time I was becoming aware of smart new Siemens rolling stock accumulating at Crown Point depot, which almost certainly meant the opportunity to experience the 37s wasn’t going to be there for long.
Apparently, Abellio East Anglia is in the process of renewing its entire rolling stock fleet of over 1,000 vehicles (I presume that counts every section of a multi car set]. 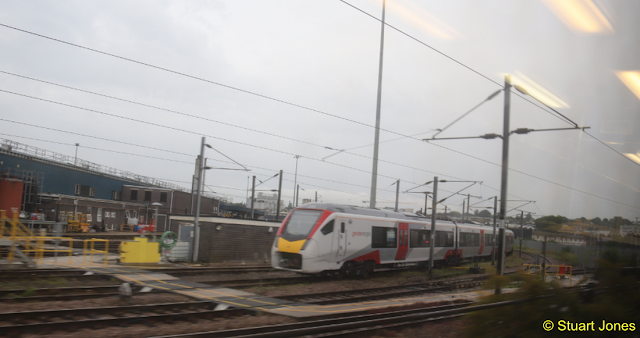 Then on Monday 17 June, I thought I’d have another go, buying a ticket en-route at Ely to make sure I could make the connection in time. When I got to Norwich, the displays were showing the Great Yarmouth departure as cancelled. I asked one of the staff on the platform and he said the locomotives were broken and had been taken away to be mended. He recommended checking in the enquiry office to find out whether they’d be back for the 14.55.
Behind the counter they were very helpful and very busy, I think because the Sheringham train had also failed requiring another replacement bus service, but with the kind assistance of a driver, determined that the 17.36 would see the 37’s return. Unfortunately, this was incompatible with my schedule, and I cashed in the tickets at the ticket office.

The following day, I arrived at Norwich Station with no intention of going to Yarmouth, only to see the display saying my train as far as Peterborough, the 16.56 to Manchester was cancelled.
I determined that my best alternative was going to be the 17.35 to Cambridge, change at Ely, which left me around 40 minutes to wait. After obtaining provisions for the journey from the Co-op, I got a cup of tea in the café and sat down. 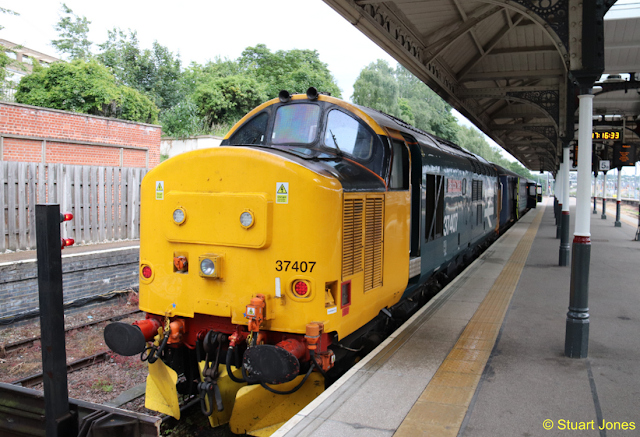 The train in platform 4 pulled out and there across the station sat the Yarmouth train with 37407 in large logo livery on the station end. It’s now or never I thought. 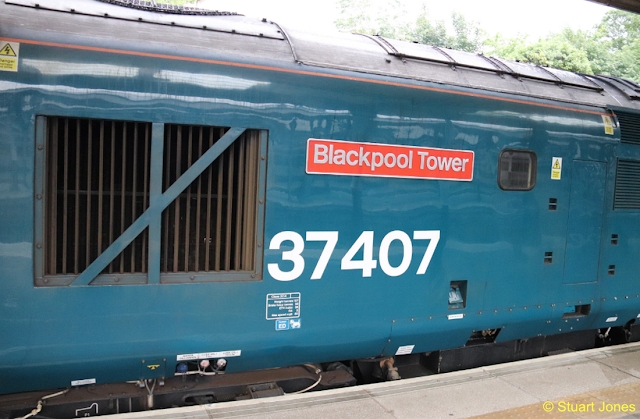 Luckily my tea was in a takeaway cup, so I put the lid on and got up. A quick check at the help desk with a Greater Anglia lady suffering from a slipped disc elicited that the timings meant I could make Yarmouth and back and still catch the 1854 home, only adding an hour to my journey.
I popped through to the ticket office and spent £6.35 (with Senior Railcard) for the trip. When I suggested that the old stock would soon be gone she said it was supposed to be the end of the month but her guess was that with another train having suffered damage from a tree they would probably be kept on for a while.

After more pictures at each end of platform 6 I climbed aboard, the first time I’d been in slam door stock other then on a preserved line for some time. The Direct Rail Services carriages, with all seats at tables, were trimmed in dark blue and were considerably darker inside than modern stock but they were warm and very comfortable. 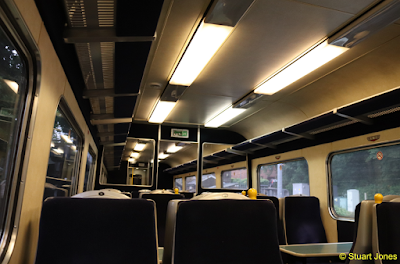 I sat in the centre carriage, which probably wasn’t the best place to maximise the aural qualities of the 37s but when 17.36 came you could still hear and feel them as we roared out of the station, past Crown Point and headed for our first stop at Brundall Gardens, complete with hanging baskets.

Just before departure from Norwich I had been joined at the table by a young man who was somewhat concerned because he was going to be around half an hour late for his shift in the bar at the Haven Holidays complex which wouldn’t end until around 2am. 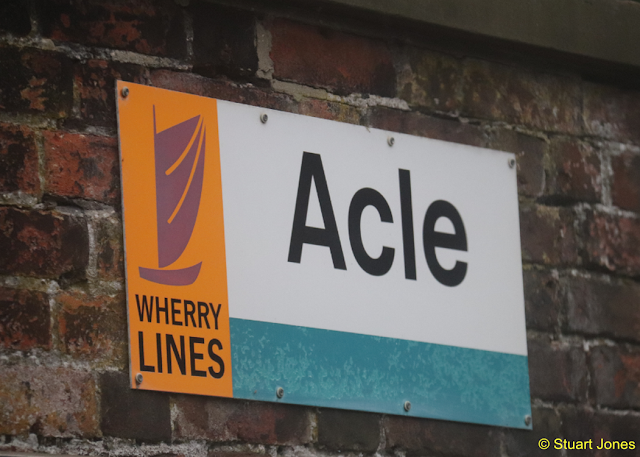 We chatted throughout the journey and I paid little attention to the scenery other than noticing the odd boatyard, allotments and the new houses at Acle that weren’t there when I’d spent a week sailing The Broads in Herbert Woods’ ‘Perfect Lady’ 40 years previously. Before I knew it we were on the approach to Yarmouth and rounding the curve into the station. 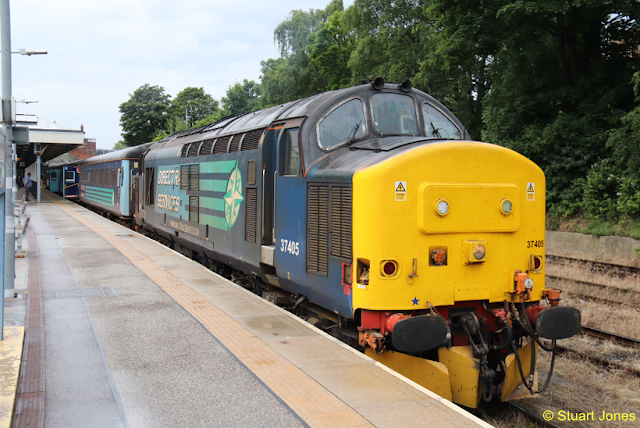 The end platform arrangement with walk round meant I could photograph both sides of the much more weathered lead loco, 37405, in Direct Rail Services livery. 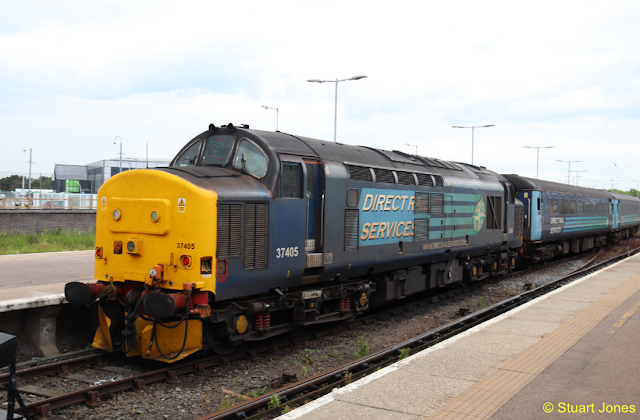 First I had to wait for a man to photograph his girlfriend in front of her. She seemed quite enthusiastic about it. A quick walk up the other end of the platform and there they were again, as she had her picture taken in front of 37407, which I noticed was adorned with an Eastfield ED shed moniker complete with Scottie dog. 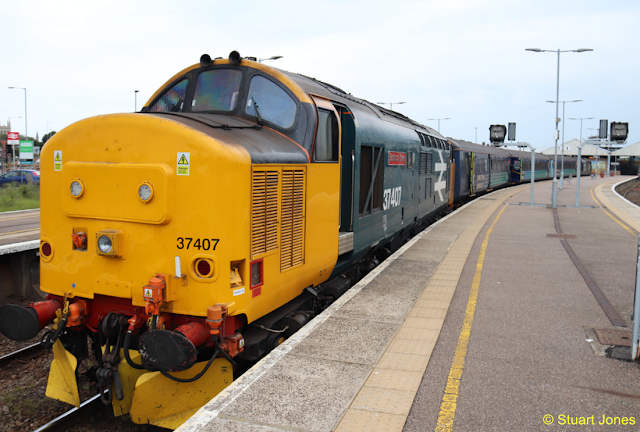 As I took my pictures the girlfriend asked whether I had been riding up and down all day, as if it would have been a perfectly understandable thing to do. Shiny nameplates were carried by the loco proclaiming ‘Blackpool Tower’ which I’d been up earlier in the year, complete with unnerving glass floored viewing platform.
My old Platform 5 book showed it as having once been ‘Loch Long’.

It's a very short layover in Great Yarmouth and only six minutes after arriving we were off again. In a window seat facing in the Norwich direction, there were river views and a glimpse of a deer charging through long grass before the line to Reedham veered off to our left, whereafter the flat open landscape was dotted with windmills, both with and without sails, and fields of cows, sheep and horses.

A little way short of Acle this changed as we plunged into a heavily wooded area and the sounds of the engine became briefly louder before stopping in the station, where we crossed with a class 156 unit, as we had on the way.
The girl and her boyfriend alighted and climbed the footbridge to witness our departure amid rumble and clatter from the 37s, the scene captured on film by a woman stood at the end of the platform with some pretty sophisticated looking kit on a tripod.

Though one of my earlier trips was thwarted by their installation, the new signalling equipment was either not working or not in use, because the semaphores were still operating. I don’t know how long it is since main lines started the switch to colour light signals but it must be many and for semaphores still to be employed so late in the 21st century is an anachronism to say the least.

As rain started to fall, Lingwood, Brundall and Brundall Gardens followed rapidly without incident, all with station signs featuring the Wherry Lines branding, complete with a stylised motif of a wherry in full sail.
Taking another look at the boatyards, I wondered whether some of the large wooden vessels at the extremities of these enclosures would ever float again?
On the river, sculling crews practiced. Passing Crown Point on the way back into Norwich, I realised that not all of the new articulated stock lined up outside was the same, some units having a short power car in the centre with two carriages either side and others apparently without the power car. All only have three numbers on the end which doesn’t help identifying what type they are. These numbers are preceded by a black triangle, which is presumably some kind of coupling code.

On the adjacent platform 3b was my train to Peterborough, an East Midlands Trains Class 158 on which the doors were still closed despite its rapidly approaching departure time. 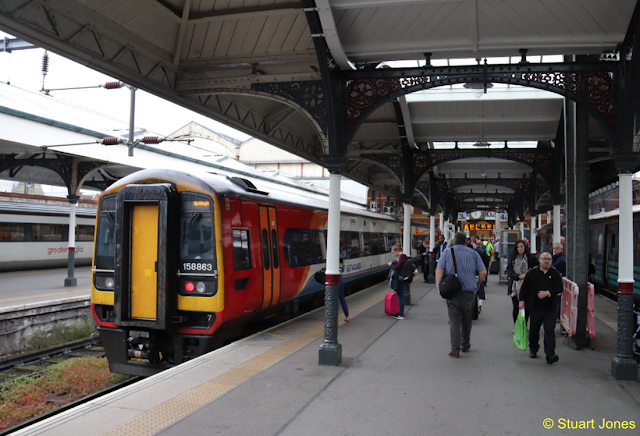 I prefer travelling on these to Cross Country’s 170s, providing I can get a forward facing seat. I’d enjoyed my excursion though I don’t anticipate making a habit of taking detours to travel behind diesels. 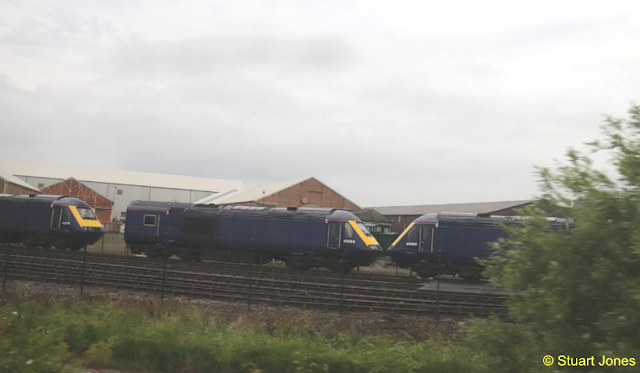 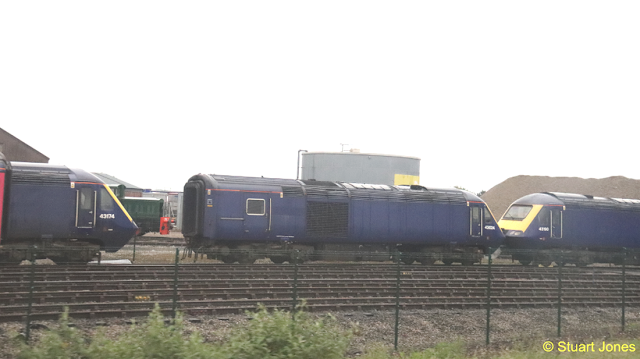 Approaching Ely was a reminder of how the nation’s stock is rapidly being modernised, with four redundant class 43’s and their carriage rakes stored in the sidings of a factory there. No doubt people will be nostalgic about Abellio’s new Greater Anglia stock one day, but I doubt I will be among their number.