DB Will Support Go-Ahead on Stuttgart to Würzburg Route

The German Transport Ministry in the Land of Baden-Württemberg has agreed with UK-based rail operator Go-Ahead to assist with running rail services on the 180 km Frankenbahn, linking Stuttgart with Würzburg via Heilbronn.
Two diagrams on this route were allocated temporarily to DB Regio in April as an emergency measure.


The decision to seek help from another operator follows dissatisfaction with Go-Ahead’s services since the operator took on five routes in the Stuttgart area, starting in June 2019. It took over RE8 services on the Stuttgart – Würzburg route in December 2019, but reliability and punctuality fell short of expectations.

Land Transport Minister Winfried Hermann said that the new timetable concept launched on the Frankenbahn in December with an hourly service was unreliable. ‘That is why we have developed a new solution for a longer transition period’, he said, adding that he was pleased that Go-Ahead now acknowledged the problems openly and was co-operating with the ministry.

Hermann indicated that the ‘interim arrangement’ could last for two years. 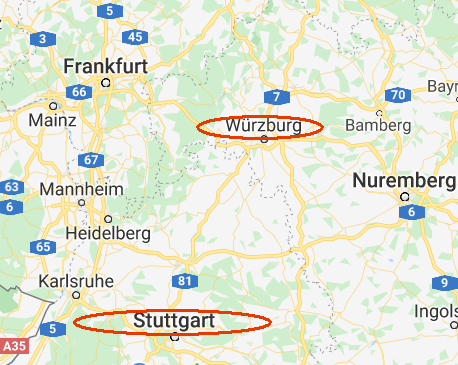 In a statement published on May 15, Go-Ahead Baden-Württemberg rejected suggestions that it had been given notice or that an emergency contract had been let to run the Frankenbahn. Accepting that the business had failed to achieve ‘stable operation’ on the route, it said that it was a ‘complex overall situation’ in which services had been impacted by late delivery of ‘defective’ rolling stock, staff shortages and ‘overloaded’ infrastructure.

Go-Ahead asserted that the Land transport ministry was assessing the market to determine how to ‘stabilise operations’, but from its own point of view all options were open. Stefan Krispin, Chief Executive of Go-Ahead Deutschland, said that the company was ‘actively working with the Transport Ministry to find a solution’.

Giving further details, Go-Ahead said that it had been aware at an early stage of the industry-wide problems with driver shortages and was currently training additional staff to relieve the shortfall at Lauda in particular.


Late delivery of Flirt3 rolling stock from Stadler Pankow in June and December 2019 had not left sufficient time for trial running and testing, meaning that the trains were affected by teething troubles ― no train had yet reached the point where it could be contractually accepted, it said.

An initial batch of 28 sets had entered service on June 9 last year, the total order placed in 2016 being for 11 three-car, 15 five-car, nine four-car and 10 six-car sets. Go-Ahead said that its new fleet had been affected by problems with control equipment which ‘the supplier had not yet been able to rectify sufficiently’; this had led to trains being taken out of use, meaning that all five routes were affected. In December the operator had hired in other rolling stock to run the Stuttgart – Nürnberg RE90 route.

Go-Ahead Baden-Württemberg also drew attention to well-known infrastructure shortcomings on the Frankenbahn. These, it pointed out, had been recognised by the Land Transport Ministry, which had announced plans in March to mitigate the situation with upgrades and improvements, in particular over the 100 km between Heilbronn and Würzburg. This includes a section of single track across a bridge over the River Jagst between Möckmühl and Züttlingen.

↓See our extra posting yesterday about the Shearings Collapse ↓