Stagecoach have launched a bus honouring Captain Tom, the 100 year old pensioner who has done much to raise money for the NHS.

Captain Tom had always been active, even driving every day, until he slipped and fractured his hip two years ago. The care and after-treatment he received then, and earlier through a cancer scare, left him eternally grateful to so many people in the NHS.

When the coronavirus pandemic struck, Captain Tom wanted to give something back to the healthcare staff who looked after him and were putting their lives on the line during the pandemic. His initial plan was to complete 100 laps of his garden, at 50 meters a time, before his hundredth birthday. He hoped to raise £1,000 for NHS charities. Over £32 million later, the centenarian has inspired a whole nation, and drawn praise and admiration from all around the world.

Determined to do more, Captain Tom and his family have identified causes close to their hearts which will benefit from the newly formed Captain Tom Foundation. They are combating loneliness, supporting hospices and helping those facing bereavement.

Passengers on the new bus will be encouraged to take Captain Tom selfies (social distancing and safety issues permitting) and, as part of Stagecoach’s current exact fare policy, any money over the price of a journey will be donated to the Foundation. The company is encouraging people to tweet their pictures to @Stagecoach_east and the first person to pose for a picture was Cambridge United head coach Mark Bonner. 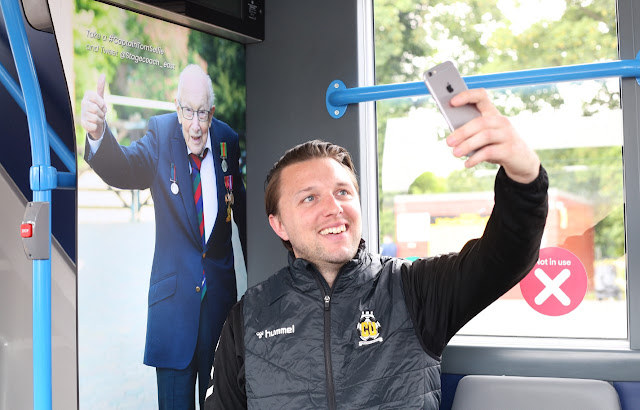 The bus will initially be based in Captain Tom’s home town of Bedford but will then go into service at other depots including Cambridge, Peterborough and, possibly, other parts of the country.

Mark said: “As a club rooted in the local community, I was delighted to add my support to this initiative.

“Captain Tom is an inspiration to us all and I hope Stagecoach passengers will give generously and take lots of selfies with our hero.”

“We too have been supporting the NHS by offering a 15 per cent discount on selected tickets for NHS ID card holders, at Cambridge Biomedical Campus and North West Anglia NHS Foundation hospitals.

“What Captain Tom has achieved is something very special and, as a resident in the area we serve, we were keen to acknowledge that in a very visible way.” 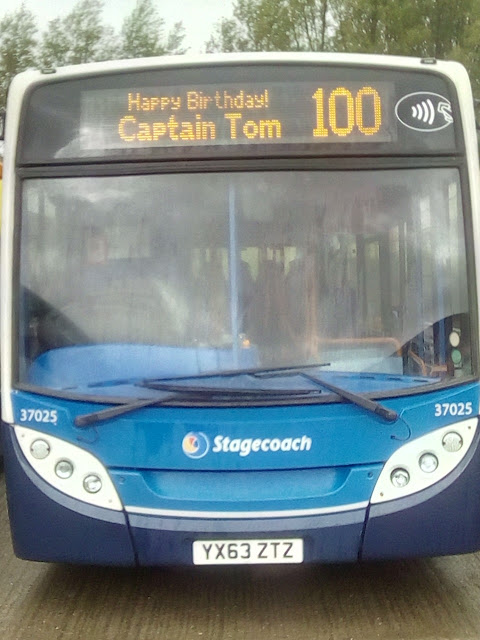 To celebrate Captain Tom's 100th birthday on 30th April, Stagecoach in South Wales replaced its ‘not in service’ messages on the bus fleet in Merthyr Tydfil depot to read ‘Happy Birthday Captain Tom’ with the service number 100. By April he had raised over £29m for the NHS.

For more information about the Captain Tom Foundation, go to: https://captaintom.org