The A1 Steam Locomotive Trust has announced that significant progress has been made on the  two new Diagram 118 boilers which have been ordered from Dampflokwerk Meiningen (Steam Locomotive Works Meiningen).

The £1m order is to supply the boiler for new Gresley class P2 No. 2007 Prince of Wales, currently under construction at Darlington Locomotive Works, and a ‘spare’ boiler for use on both No. 2007 and No. 60163 Tornado, which has completed its first decade of operations since completion in 2008.

This order will enable the Trust to rotate the three identical boilers over its two locomotives, with two operational boilers and one ‘spare’ undergoing overhaul at any one time. DB Meiningen delivered Tornado’s original boiler in July 2006.


This strategic move by theTrust will reduce the time out of traffic for each locomotive by around four months, increase the potential revenue earned by both locomotive during each operational cycle and reduce the cost of their overhauls.
By ordering both boilers at once and leveraging the purchasing power of the supporters of both locomotives, the Trust has saved a six-figure sum that would have otherwise been required if the two boilers had been procured separately.
The first new boiler – to be fitted to No. 60163 Tornado during its next overhaul – will be delivered during 2020 with the second – to be fitted to No. 2007 Prince of Wales – scheduled to be delivered in 2021.


One year on from the announcement of the £1m order and following the approval of the updated design by notified body TüV Sud, DB Meiningen is making good progress with major components for the boilers, including: the boiler barrel sections have been rolled and welded, including the thickened sections where the domes are located; the dome covers have been pressed & machined; the firebox tube plates have been drilled; the foundation ring sections have been forged & the foundation rings welded together; and a full set of superheater elements has been completed and is ready for delivery.

The Trust is using a variety of fundraising methods to support the procurement of the two new boilers in line with its policy of hypothecating the funding of each locomotive.

The funding of the boiler for new Gresley class P2 No. 2007 Prince of Wales and its contribution to the ‘spare’ boiler is coming from The Boiler Club which was launched in October 2016 to raise £600,000 plus Gift Aid from 300 supporters each donating £2,000 in up to 40 payments.

To date, over 190 supporters have subscribed to The Boiler Club pledging around £460,000 including Gift Aid. The funding of Peppercorn class A1 No. 60163 Tornado’s contribution to the ‘spare’ boiler has come from extending its ‘I ♥ 60163’ fundraising campaign. Additional funding for the ‘spare’ boiler will also come from recent legacies to the Trust.

Graeme Bunker-James, Commercial Director, The A1 Steam Locomotive Trust, commented, “We are delighted with the progress being made by DB Meiningen on our two new boilers. With all the major pressings produced and boiler barrel sections rolled we now have a kit of parts ready to start the assembly of the first boiler’s firebox shell and boiler barrel. 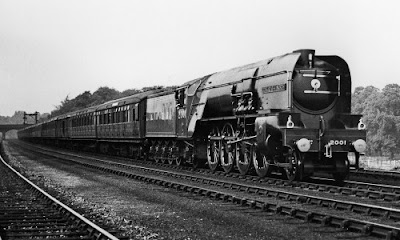 “The decision to procure two new boilers – one for the ‘heir’ Prince of Wales and the second a ‘spare’ for both No. 2007 and Tornado – is a major strategic move by The A1 Steam Locomotive Trust and fulfils a long-held desire to have three boilers for our two locomotives in order to reduce their time out of traffic during overhauls and act as an insurance policy.

Having a ‘spare’ boiler will greatly assist with the delivery of regular itinerary tours and ensure that we are a reliable provider of locomotives to our customers as well as our direct passengers.

“The start of construction of the boiler for No. 2007 Prince of Wales is the next major milestone in the project to build Britain’s most powerful steam locomotive and its delivery in 2021 keeps the project on-track for completion within the next three years.
The Trust was only able to make such a bold move due to the loyalty and generosity of its supporters of both locomotives. We therefore urge those not yet on-board to join us as a ‘price of a pint of beer a week’ covenantor, to either locomotive, or as a member of The Boiler Club for Prince of Wales.”