The hydrogen powered Solaris Urbino 12 is being tested again in Austria.
After successful test runs in Vienna in June, the bus has now been handed over to the Dr. Richard Group, the largest private bus operator in Austria, which presented the vehicle in St. Pölten on 7 July 2020. 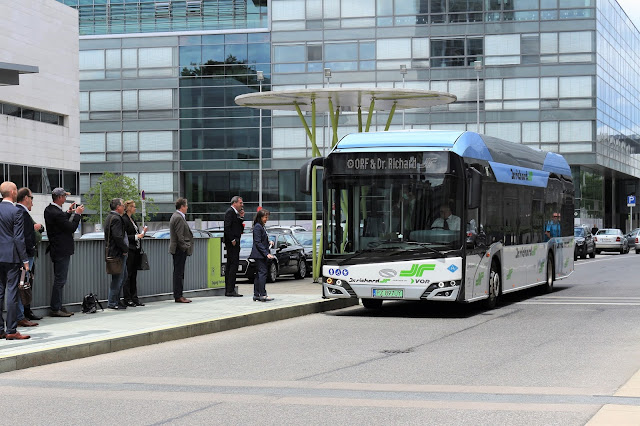 The Solaris Urbino 12 hydrogen uses a set of fuel cells with a power of 70 kW. The hydrogen is stored in gaseous form in five new-generation tanks . The set of type 4 composite tanks (of the latest generation available on the market), are placed longitudinally above the first axle of the vehicle, and have a total volume of 1560 liters.

The energy needed to power the bus is produced in the fuel cell. The hydrogen is turned into electricity, which, in turn, is fed directly the bus driveline which consists of an axle with electric motors.
The bus is also fitted with a Solaris High Power battery acting as an additional electric power storage facility.
The sole by-products generated during the operation of the Solaris Urbino 12 hydrogen are heat and steam. Consequently, the vehicles do not generate any noxious substances whatsoever.

The Dr. Richard Group is the biggest family-run carrier in Austria with a fleet of nearly 1000 buses, including the vehicles made by Solaris. The cooperation of the two firms started back in 2010.


Dr Ludwig Richard, Owner and President of the Dr Richard Group said
"The Dr. Richard Group has been dealing with emission-free mobility for a few years now. Over the course of numerous tests of battery buses we were able to gain a valuable insight into their practical operation and implementation. Now, for the first time ever, we have a chance to test a hydrogen-powered Solaris bus. The longer the distances to be covered and the heavier the vehicle itself, the more important this type of driveline is becoming, also in terms of resources needed to refuel. The relatively high costs still remain a barrier to a large-scale implementation of this particularly environment-friendly technology, but we look forward to the test which constitutes a significant milestone on our path to green mobility"


Solaris already have 57 Hydrogen buses on order, of which a batch of 25 hydrogen buses is bound to the two German cities of Bolzano, Cologne and Wuppertal.  They are scheduled for delivery by the end of this year.

SASA Bolzano (capital city of South Tyrol province, close to the border with Austria) was the first operator to secure an order with Solaris for the fuel cell buses, which was unveiled at UITP Summit in Stockholm in June 2019. 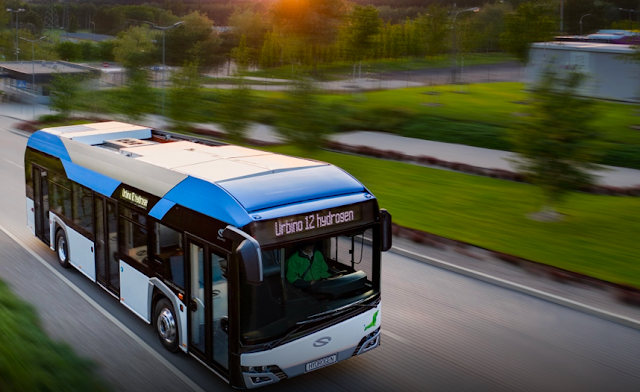 Connexxion (Transdev group) will put into service hydrogen buses in the Netherlands, which prides itself to be the most dynamic country in Europe with regards to energy transition in public transport sector. An agreement with Solaris has been secured for the delivery of 20 Urbino hydrogen vehicles.