Daimler say "It is a pioneering achievement in automotive construction which demonstrates the company’s position as segment leader in technology for all-electric inter-city buses". 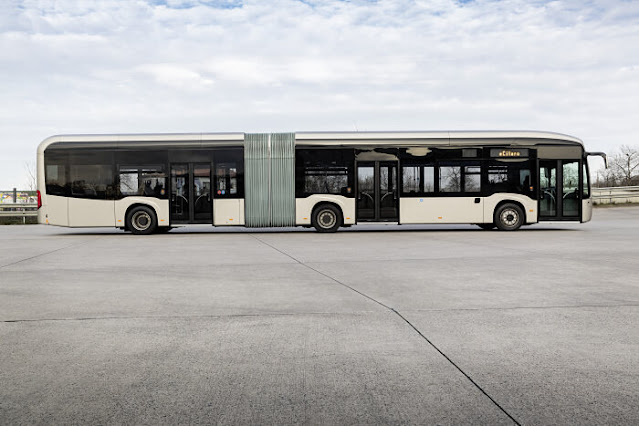 With this battery concept, Mercedes-Benz takes the technological lead not just in the bus segment but in automotive construction worldwide.
The advantage of solid-state batteries is their long service life. The eCitaro/eCitaro G with this technology is given a basic warranty for up to ten years or an energy throughput of up to 280 MWh per battery assembly.
The solid state batteries are an option on the already launched eCitaro G which they say
"Is loaded with revolutionary technology. We are continuing resolutely on the path towards the electrification of city buses: the new 18.13 metre eCitaro G is ideal for operations in congested towns and cities on routes with large numbers of passengers, and is an important factor in improving the quality of life in inner cities"

Both the eCitaro G articulated bus and the eCitaro solo bus meet individual requirements from the transport companies, facilitating the move to e-mobility.
The standard batteries in the eCitaro G and eCitaro are charged with DC current via a charging connector with a charging output of up to 150 kW. The connector is located on the right-hand side above the wheel arch of the front axle. In addition to this, some more plug positions on the left-hand side and at the rear of the vehicle will to be offered. 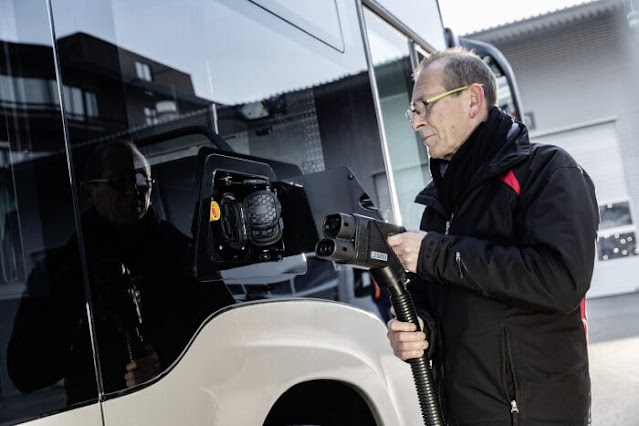 As announced at launch, the eCitaro as a solo or articulated bus can also be supplied with a current collector/pantograph as an optional alternative to plug-in charging. A further variant to follow will have contact rails for charging with a fixed-position pantograph. These two variations double the already high charging output to up to 300 kW.
Like the solo bus, the eCitaro G is powered by the tried-and-tested ZF AVE 130 electric axle, which is located in the rear section. For maximum traction and use in demanding topography, the articulated bus can even be supplied with two powered axles.
The motors are sited near the wheel hubs. Per axle they deliver up to 2 x 125 kW of power, generating 2 x 485 Nm of torque, as in the eCitaro.
With the transmission ratio used, this equates to 2 x 11,000 Nm. This gives the articulated bus a commanding amount of drive power. 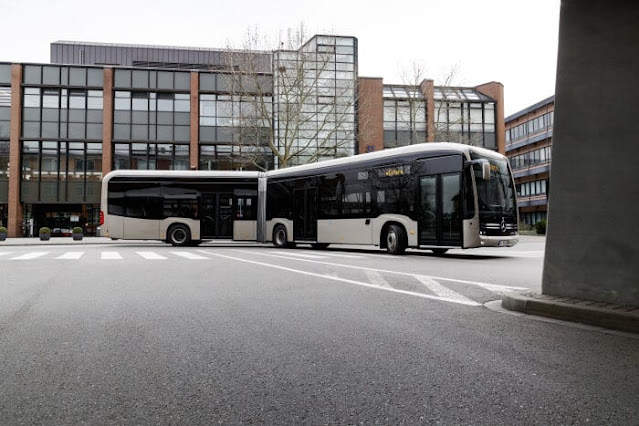 Over a very short period, the eCitaro has evolved from a one-off into a complete model series. It comprises the eCitaro solo bus and the new eCitaro G articulated bus and incorporates an extremely wide range of charging and battery technologies.
The eCitaro is thus positioned as an all-electric city bus which can be tailored to match any application profile for regular service city buses, while Mercedes-Benz underscores its leadership position in the field of technology for electric mobility. 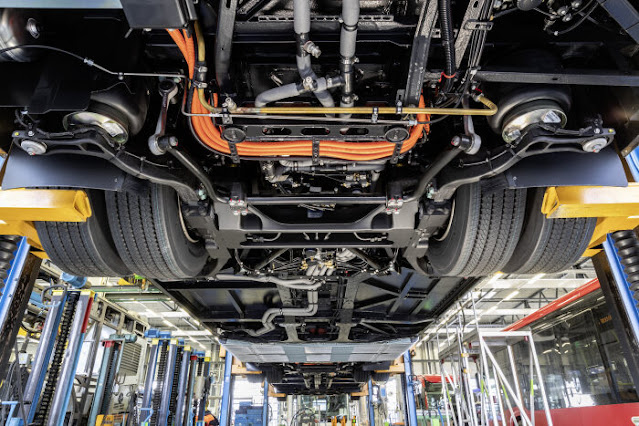 The new eCitaro G is the first city bus in its category anywhere in the world to be equipped with solid-state batteries. These batteries have a very high energy density – around 25 percent greater than the coming generation of traditional lithium-ion batteries with liquid electrolyte.
The new battery technology with an energy content of 441 kWh each is available both for the articulated bus and the solo bus.
This gives the eCitaro G a range of up to 220 kilometres (137 miles) in favourable conditions with average demands on speed, topography and load along with straightforward climatic conditions.
In the winter with the heating in operation, the eCitaro G covers an impressive 170 kilometres.

Another advantage of solid-state batteries is their long service life. The eCitaro/eCitaro G with this technology thus receive a basic warranty for up to ten years or an energy throughput of up to 280 MWh per battery assembly.