Many thanks to all who visit our site and who have contributed during the year. Our viewing figures go from strength, with us recently passing the 2.9 million mark since we began in 2011.

We plan to take a short break over the Christmas period, but if important news comes along we will keep you informed. In the meantime please enjoy this particular edition which is somewhat more lengthy than normal.

2020 will be remembered for all the wrong reasons. The devastation caused by the Corona virus has made its mark on the travel industry. Other businesses and industry plus most other things in our lives have been similarly affected.

This has been re-written three times in the space of two weeks. Vaccinations are underway but we don't know whether the virus can be controlled by the vaccine or how the new version of the disease will impact.  The very latest restrictions will impact heavily on those who intended to visit family and friends over the Christmas period. Train and coach companies had planned for large numbers of people travelling - will these extra services still be required? We've never ever faced so much uncertainty in our lives.

The transport industry has faced upheaval of great magnitude. How do you work out what resources to provide with government advice saying "don't travel by public transport" even though it is still expected to provide facilities for essential users.

Some financial help has been forthcoming to rail and bus companies - coach operators in N Ireland and Scotland have been offered funding, but none so far for coach operators in England and Wales. How do these companies plan investment for the future, if they have a future? Will passenger levels ever return and if so will rail, bus and coach manufacturers still be in existance and be ready to step up production again?

Heritage Railways and Transport museums have suffered badly without finance from visitors.
Some funding has been available from the Government’s Culture Recovery Fund, to help them survive the COVID-19 pandemic and minimise financial hardship but these organisations can only hope that normality resumes as soon as possible.
Grants have been awarded to: The Bodmin & Wenford Railway (£260,000); Cambrian Heritage Railways (£20,000); Colne Valley Railway (£20,000); Dinmore Manor Locomotive Ltd (£26,100); Epping Ongar Railway Holdings (£98,000).

A1 Steam Locomotive Trust (£153,000); Vintage Trains Charitable Trust (£194,800); Wealsden Railway Company (£153,900); Wensleydale Railway (£90,000); West Somerset Railway (£865,000); and WyvernRail (£85,000).
Some of the railways have decided to run Christmas Specials with covid safety rules in place combined with restricted numbers on trains. Others have decided it just isn't worthwhile spending the time and effort to run for such a short season.

As well as Santa Specials a few heritage lines have seized the opportunity to make use of the developments in lighting technology, combining old trains with thousands of lights controlled by clever electrical control systems. 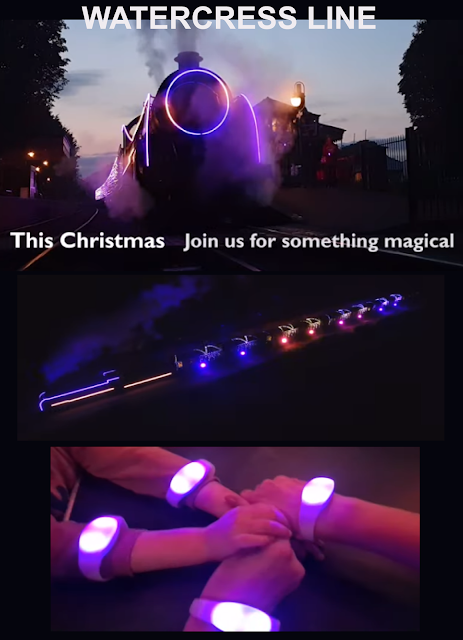 Taking place on Hampshire's Watercress Line, tickets have gone on sale for what they say is the 'world first' LED steam locomotive show,The one-of-a-kind show will see trains illuminated as passengers are taken on a special festive journey between Alton and Alresford.

The event, created by Mid Hants Railway Ltd, has been running on various dates between November 14 and January 3 and is being billed as the "perfect Christmas experience for all the family".

Created in partnership with Purple Lighting Ltd, it is a light show, on and in a steam train, consisting of 13,174 fully controllable colour mixing LED lights and LED interactive wristbands.
The Severn Valley Railway have been running their Steam in Lights attraction, their website saying
"The magic begins the moment you arrive at Bridgnorth; cameras at the ready as your train steams into the station, adorned with thousands of colourful lights. 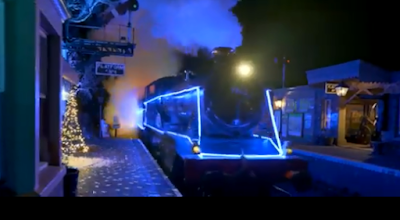 Once aboard, sit back and relax and let the magic unfold in your own private compartment as the festive music begins to play and the story begins. Keep your eyes peeled for amazing displays of magical creatures, mystical auroras and snow flurries - only seen from the train!"

It has been difficult at times to report positive news during 2020, however, the continued progress on Electric and Hydrogen power in rail, bus, coach and air is one aspect that has continued to hit the headlines. Development has continued unabated and it seems that we receive press releases every week detailing further progress. 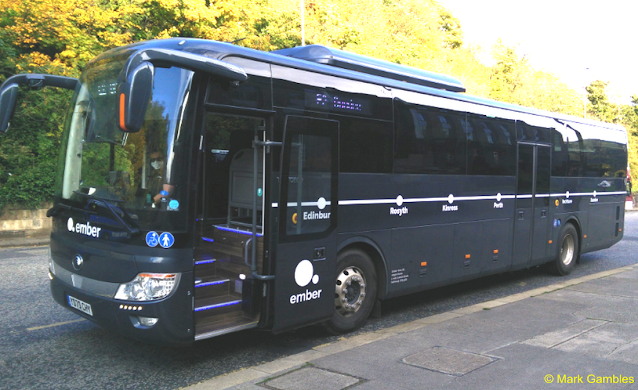 More Electrically powered buses entered service in a number of other UK towns and cities.

Limited trials of Hydrogen powered buses in London on the RV1 route have been carried out over some years. Roger French has written about these pioneering hydrogen buses. see here

The pace of development is now being stepped up in this area, new vehicles have recently been introduced in Aberdeen and a new fleet of double deckers is being built for London.

The UK HydroFLEX hydrogen-powered train — which has been developed by a team from the University of Birmingham and Porterbrook is being trialled in the U.K. It has successfully run between Long Marston and Evesham in the West Midlands region of England. click here

During early December, a hydrogen fuel-cell plane that’s capable of carrying passengers completed its maiden flight.
In another step forward for low and zero-emission flight., ZeroAvia’s six-seater Piper M-class aircraft — which has been retrofitted with the device that combines hydrogen and oxygen to produce electricity — undertook a taxi, take-off, full pattern circuit and landing.
European aerospace giant Airbus has released details here of three hydrogen-fueled concept planes, saying they could enter service by the year 2035. The designs, named ZEROe, differ in size and style, but are all meant to be zero-emission, using hydrogen as their primary source of power. During the Christmas break you might like to take a look at the latest website to be added to our Focus Transport Links section. Barry Doe's Directory Of Printed Bus & Rail Timetables, Web Sites & Enquiry Offices. Click here
Barry is a regular long term contributor to Rail magazine, giving interesting updates together with detailed reviews of ticket and timetable information. His website is extensive, utilising the knowledge gained over many years of the bus and rail industry'

15 More Restoring Your Railway Schemes Receive Funding
Towns and villages across England, which were left isolated when their railways were closed, are one step closer to having their connections restored and transformed, as 15 more projects are awarded up to £50,000 each to progress plans to reinstate historic stations and restore passenger services, as announced in the Spending Review.

More than 50 years since the railways were radically reshaped, including thousands of lines and stations closed during the infamous Beeching cuts of the 1960s, this latest investment will kick-start work on schemes that reconnect previously cut-off communities, with the potential to reinvigorate local economies and level up opportunity across the country.

Schemes awarded funding include:
Restoring Ferryhill station in Sedgefield, demolished alongside Mainsforth Colliery in 1969
Returning services to Consett in the North East
Bringing back a station close to the medieval Beeston Castle in Cheshire
Reinstating services for communities around Ashfield on the Maid Marian Line
Full list here

"For towns and villages left isolated and forgotten by Beeching cuts, restoring a rail line or a station has the potential to revitalise a community. It breathes new life into our high streets, drives investment in businesses and housing, and opens new opportunities for work and education.

By building back with a real focus on better connections and supporting left-behind communities, we’re delivering our promise to level up this country.

These latest projects to receive a share of the second round of the Restoring Your Railway ‘Ideas Fund’ will progress plans to deliver new routes and improved connectivity, as well as developing plans for new stations to areas poorly served by public transport.

Entries have been specifically judged on their ability to deliver real economic benefits and support left-behind communities, with investment targeted at regenerating local economies by:
supporting new house developments, opening up access to jobs and education and boosting tourism"

"From restoring historic stations at Ferryhill and Langport, to reinstating passenger services on the Maid Marian Line and transforming rail connections around Bolton, Bury and Consett, our investment will provide the vital links that people depend on"

Among the winning bids is a scheme to reinstate passenger services from Bolton to Manchester through Radcliffe with a radial Metrolink – running through some of the most economically deprived parts of the UK.

A proposal for a Mid-Cornwall Metro has also been awarded development funding which would create a coast to coast through-service connecting the biggest towns in Cornwall – Newquay, Par, St Austell, Truro, Penryn and Falmouth – reducing journey times and easing road congestion.

Today’s news comes as the government provides £32 million of funding to deliver 3new stations in England and Wales, including Edginswell in Torquay, Thanet Parkway in Kent and St Clears in Carmarthenshire, with additional funding being invested to develop a further 2 in Haxby and Deeside.

The Beeching cuts saw tracks ripped up or grassed over, iconic viaducts and bridges left without a purpose and communities set adrift. Initially proposed by British Rail chief Dr Richard Beeching in 1963, passenger services were ended on around a third of the rail network, with more than 2,300 stations closed and up to 5,000 miles of track axed across the UK.

Over the summer, proposals from MPs and local authorities for the second round of the ‘Ideas Fund’ were considered by an expert panel, including Rail Minister Chris Heaton-Harris and Network Rail Chair Sir Peter Hendy, after 51 bids were received earlier this year.

A further 28 bids will receive further guidance to help develop and refine their ideas for assessment in future funding rounds.

The Midland Pullman made its inaugural journey from London St Pancras International to Crewe on 12th December. Here is a link to one of the videos to be found on YouTube.

After a break of 22 years, London’s Tube map is back on track as far as Thameslink is concerned.

Thameslink, which includes services from East Croydon, Norwood Junction, Purley, Sutton and Wimbledon into London Bridge, Blackfriars and St Pancras, will be on the map from next month, in what Transport for London says is a temporary measure to provide additional information for travellers during the coronavirus pandemic.

Thameslink services were first displayed on the world-famous map in 1987, but they were removed in 1999. 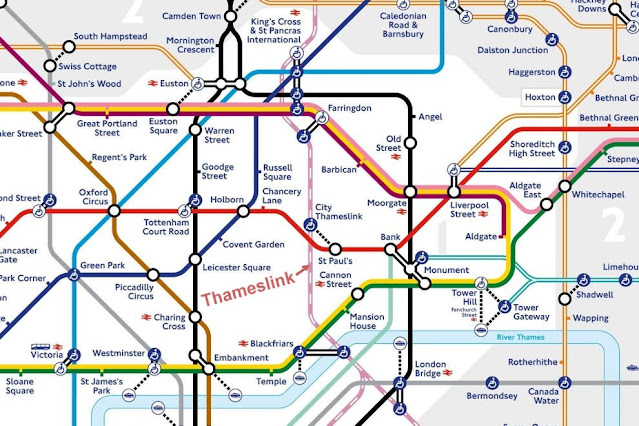 Go North East launched their Santa Bus in December here
Vintage Trains Acquire Pacers for Mainline Use here
Pensioner who hands out snacks to bus drivers on her local route has had a bus named in her honour here
On 8th December Avanti West Coast celebrated their first year of operation, taking over from Virgin Trains who refused to take on risky and unreasonable pension fund liabilities.
The avanti website covered this here
Here's a report showing how Boeing and FAA attempted to cover up information on 737 Max.
here
Go North East Raises £12,000 for Food Banks by Not Handling Change  here
Update on paddle steamer Waverley here
A Year on the Network here
During the Christmas break why don't you try the search facility on this website, it works well and will track back through all of our 4,200 postings since 2011.
In the meantime we hope you will have a safe, enjoyable Christmas.
DG