Named after its legendary designer, this 'flying banana' is a beautifully preserved example of the High Speed Train which blazed a trail in 1976 and remains the world's fastest diesel locomotive.

The loco might not be available to see while the museum is closed, but see below for the Curator with a Camera video so you can enjoy it from home.
A FEAT OF BRITISH ENGINEERING


Considered Britain's most influential modern loco, these powerful engines—which achieved a world-record 148mph top speed—quickly formed the backbone of Britain's high-speed rail routes and revived interest in rail travel after years in the doldrums.
CURATOR WITH A CAMERA

Anthony Coulls, Senior Curator of Rail Transport and Technology, takes you on an in-depth tour of the interior and exterior of our Class 43 High Speed Train power car and tells the story of this impactful locomotive.
Click here to see the video
ABOUT THE DESIGNER

Class 43 no. 43002 was named after its designer Sir Kenneth Grange in 2016, when it also returned to its original blue and yellow livery. 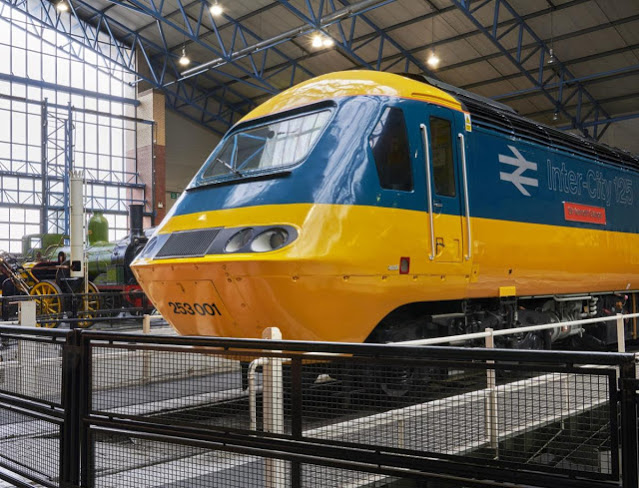 HOW IT CAME TO THE RAILWAY MUSEUM

As well as being the first InterCity 125 produced, Sir Kenneth Grange was the last 125 to operate a passenger service before this type of locomotive was retired from London express services .

Angel Trains and Great Western Railway generously donated the power car to the museum after its working life was concluded in 2019.