In the first MAN e-bus deployment in Denmark, 25 MAN Lion’s City 12 E all electric models have been ordered for delivery to Anchersen A/S later in 2021. They will provide an extra-environmentally friendly means of transport for visitors and residents alike as they travel around the Danish capital. 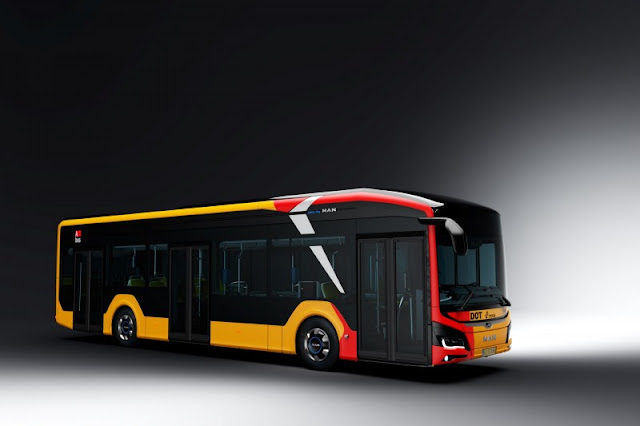 The all-electric city buses were ordered by Anchersen A/S, which saw the Copenhagen-based local transport company giving MAN Truck & Bus its first electric bus order from Denmark.
A few months ago, Nobina Sverige AB ordered 22 Lion’s City E buses from MAN for Malmö, Sweden.
The Malmö and Copenhagen orders now represent the next biggest purchase of MAN electric buses from Scandinavia.
Rudi Kuchta, Head of Business Unit Bus at MAN Truck & Bus says. “It’s great to see that our electric bus is gaining such a positive reception, that it’s on the road in more and more cities in Europe, and that the issue of protecting our environment is becoming more and more important in scheduled-service transport.” 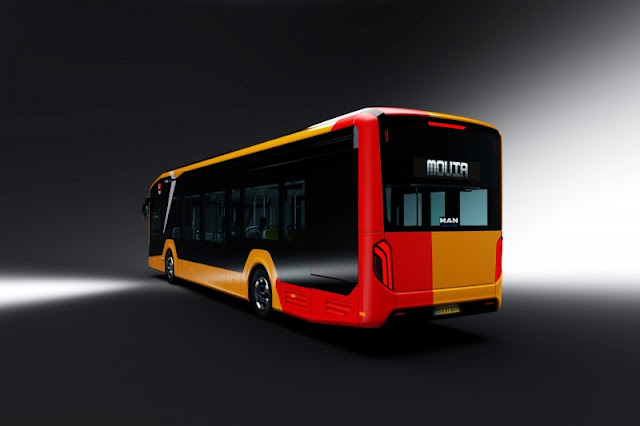 The 25 state-of-the-art city buses will serve the 7A bus route through Copenhagen City Centre, which is used by more than 4.3 million passengers each year. In the MAN Lion’s City E, Anchersen has opted for a reliable electric bus with tried-and-tested cell and battery technology. “For us, the role of electric vehicles in bus transport will be a top priority in the future.
To make urban transport as sustainable as possible, our new city buses are charged exclusively using green electricity. This means that they are completely emission-free in day-to-day service as well as being extremely quiet on the road,” says Poul Anchersen, the CEO and owner of Anchersen A/S. “In addition, MAN city buses offer our customers maximum comfort and safety thanks to the ESP system installed as one of a number of additional features”

The new Copenhagen city buses offer space for up to 76 passengers. Extended seat pitch and comfortable padded seats ensure that passengers have a pleasant experience en route. “Providing sufficient space is currently becoming much more important in the age of the coronavirus pandemic. Riders on our buses have the opportunity to keep a better distance from their fellow passengers,” says Rudi Kuchta.
In the Lion’s City E, this is primarily due to the optimised seating area in the rear, which was made possible due to the lack of any engine housing in the passenger compartment.

MAN uses a central motor on the rear axle to drive its electric bus. This has several advantages: Driving stability and safety increase, as does the maximum energy recovery during braking. 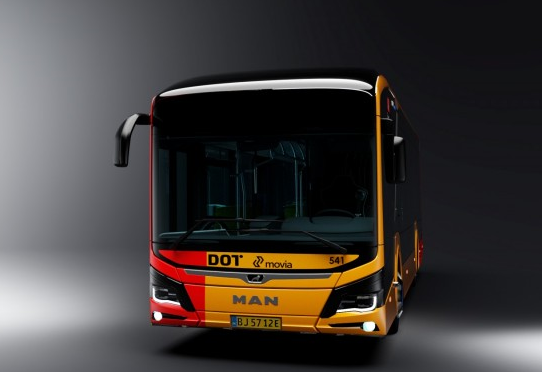 The power for the fully electric driveline comes from the batteries on the vehicle’s roof, which have an installed capacity of 480 kWh. MAN relies on sophisticated battery cell technology from the Group’s modular system and as a result, the electric buses offer a reliable range of 200 km and up to 270 km in favourable conditions over the entire service life of the batteries.

The batteries are depot-charged via a combined charging system (CCS) connector. An average charging power of 100 kW, the MAN Lion’s City 12 E is fully charged in less than three hours – and at the maximum charging power of 150 kW, the charging time is shorter still.
Charged in the depot, the long-lasting batteries guarantee simple integration into existing commercial operations. “That was a crucial factor for us. Since we charge our bus fleet exclusively at the depot, we need reliable buses able to cover a long range,” Anchersen says. “In our last invitation to tender, we fielded offers from multiple electric bus manufacturers.
Some of the key factors behind our decision in favour of the MAN Lion’s City E were the capacity of the installed battery packs, the local service offered and the outstanding experiences other transport companies have already had with the electric bus.
Plus, we were impressed by the fast delivery time and the smooth, unbureaucratic ordering process.” To ensure that it has sufficient charging capacity for the electric city buses, Anchersen A/S is planning to build an electric bus port with 25 charging stations at its depot in Jernholmen, just outside Copenhagen.

Taking the newly ordered vehicles into account, the Anchersen A/S fleet consists of around 200 buses, including diesel and electric models. “MAN is the new brand in our fleet. We are already very excited about the electric buses and how they will master their regular routes in Copenhagen,” Poul Anchersen adds.
According to the CEO, the company places great emphasis on environmentally friendly solutions, innovation and progress when awarding contracts.
For a number of years now, Anchersen has consistently pursued a strategy of reducing its emissions as much as possible. “Just like Movia (the public transport authority for eastern Denmark) as well as the City of Copenhagen and Denmark nationally, we see electric vehicles as the future of zero-emissions public transport.”