Windsor Castle was the scene of a spectacular display of pomp and pageantry yesterday, as the Queen laid her husband to rest after 73 years of 'unwavering loyalty'.

Inside the castle bailey, the Duke of Edinburgh's casket was covered in his personal standard and carried his sword, naval cap and a wreath of flowers as pallbearers lowered him on to his extraordinary self-designed Land Rover hearse. The Duke, who died at the age of 99 last week, worked on creating the bespoke hearse for 16 years, starting in 2003.

His modifications included the open top rear section, where his coffin rested, and the military green colour. 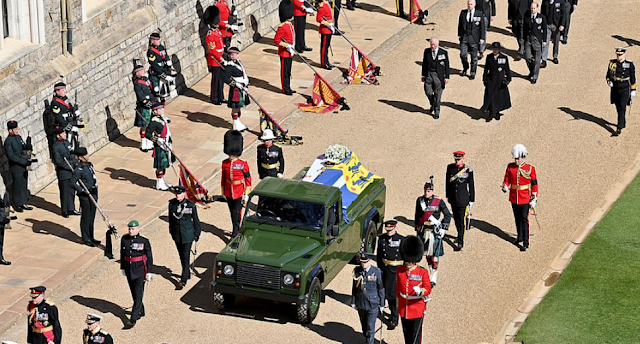 Yesterday the Land Rover Defender was used to carry his coffin to St George's Chapel Windsor. The driver of Prince Philip's custom-built Land Rover hearse spent a week practising the right speed before the 4x4 took centre stage transporting the duke's coffin to St George's Chapel.
Soldiers from The Corps of Royal Electrical and Mechanical Engineers (REME) had responsibility for ensuring the vehicle stuck to its precise route and timings, after several days of intense rehearsals.
The Duke's four children - the Prince of Wales, the Princess Royal, the Duke of York and the Earl of Wessex - as well as grandsons the Duke of Cambridge and Duke of Sussex, walked behind the vehicle in procession. 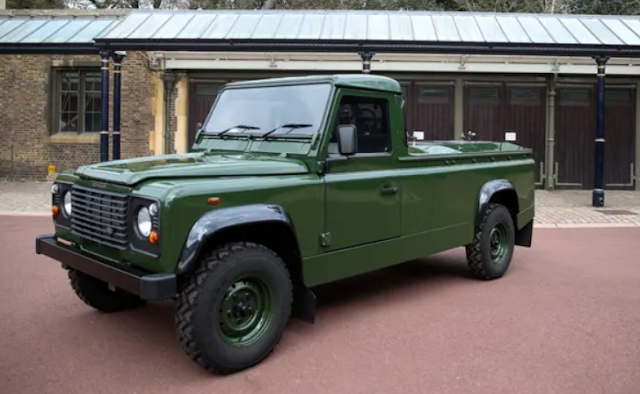 The Duke of Edinburgh began creating his own hearse in collaboration with Land Rover in 2003, the year he turned 82.

The Duke, who served in the Royal Navy in World War Two, requested that the original Belize Green bodywork be switched to Dark Bronze Green, a colour used for many military Land Rovers. 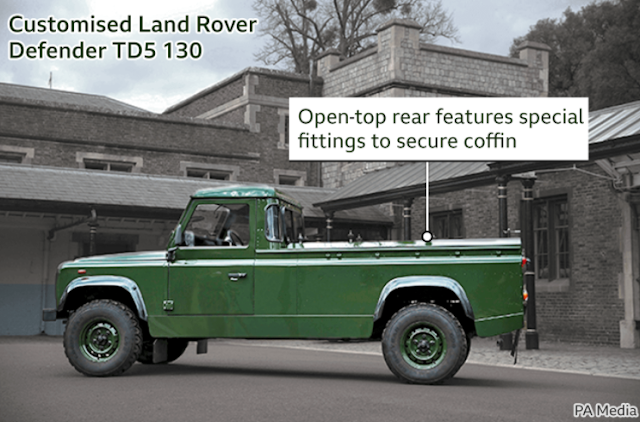 He also designed the open top rear section on the chassis cab vehicle, where his coffin was placed, made to his exact specifications, including the rubber grips on silver metal pins known as the "stops" or "stoppers" which prevent the coffin from moving.

The polished sturdy, utilitarian vehicle, with its heavy-duty wheels and angular structure, stands as a showcase for the duke’s practical nature, and his passion for functional design and engineering.
The vehicle also has matching green wheel hubs, a black front grille, a single cab and no registration plates.

The Defender was made at Land Rover's factory in Solihull and the duke oversaw the modifications for several years, making the final adjustments in 2019, the year he turned 98.