The last Great Northern Class 365 train departed from King’s Cross on Friday 14th May 2021, after 25 years of service.

The 18:12 farewell service, lengthened from eight to 12 carriages for the special journey, called at Stevenage, Biggleswade, St Neots and Huntingdon on its way to Peterborough.

It displayed a commemorative headboard with the Network South East “Networker Express” branding carried by the 365 fleet when introduced by British Rail in 1996.

The Class 365s entered service badged as 'Networker Express' trains from 9 December 1996 on the London King's Cross to Peterborough and King's Lynn routes. They have been used to carry the Her Majesty The Queen and the Duke of Edinburgh to King’s Lynn for Sandringham.

Since 2017, with the arrival of more modern 387s and 717s on Great Northern’s routes, the 365s had been used only as ‘peak-busters’, providing extra capacity on limited-stop peak-time services.

Tom Moran, Managing Director for Great Northern and Thameslink, was on Friday’s‘Network Express’ to Peterborough.

“It was a real honour to be on the last Class 365 out of King’s Cross. I’d like to thank every member of the team who’s played a role in keeping them running so reliably for the last quarter of a century!

“You could see the affection our customers and colleagues have for these trains from the response we had as we set off from King’s Cross and at each stop on the route.” 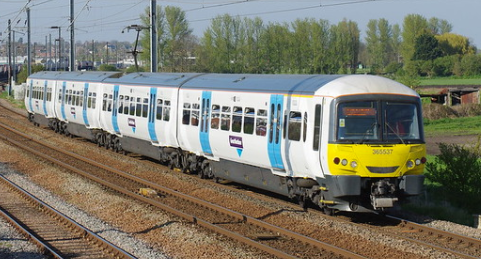 Chief Operating Officer Steve White was also on board. He said: “Today marked another milestone in the progressive renewal of our fleet as we said goodbye to our Class 365s. When they were introduced 25 years ago, they were ahead of their time and they have served us well.

“With the introduction of our summer 2021 timetable, newer, air-conditioned, Class 387 trains will temporarily support the GN network. This will help our passenger recovery from COVID-19 and also reduce our costs ensuring better value for taxpayers.”


The Class 365s entered service badged as 'Networker Express' trains from 9 December 1996 on the London King's Cross to Peterborough and King's Lynn routes, and in the following year on Connex South Eastern between London and Kent.
By 2004, Connex South Eastern’s part of the fleet was transferred to join the majority of the 365s, so that all 340 were operating out of King’s Cross.
In the short term, subject to the expected rising passenger demand, Great Northern’s parent company Govia Thameslink Railway (GTR) will replace the 365s with Class 387 trains that normally provide Gatwick Express services.
They have not been in use during the major Gatwick Airport station expansion programme, but now Great Northern passengers will benefit from the air conditioning and security CCTV that the older trains lack.
In the longer term, when air passengers return to Gatwick in volume and the airport station redevelopment is complete, Great Northern will work with the Department for Transport to introduce additional trains as required. This will enable the Class 387 trains to be returned to Gatwick Express, while also ensuring that Great Northern customers continue to enjoy the benefits of more modern trains.
Abellio ScotRail leased 10 class 365 units, for a year from May 2018 as short term cover until sufficient numbers of newly built class 385 units were brought into service. The 365 fleet were maintained at Glasgow Shields Road Depot and the class was taken out of passenger service in March 2019. More info here

The Class 365s will be returned to the Department for Transport, who took ownership of them in 2019 under the terms of the original procurement contract