Avanti West Coast has named one of its Pendolino trains ‘Royal Scot’ to mark a record attempt with Network Rail for the fastest journey between London and Glasgow.

The 390044 Pendolino carries the name of what was once the flagship train in the West Coast Main Line Timetable and which provided the fastest passenger services from London to Glasgow for many years.

Royal Scot made its inaugural journey yesterday (17 June) with a non-stop run from London Euston to Glasgow Central that aimed to beat a record of 3 hours 52 minutes and 40 seconds that was set in 1984 by an Advanced Passenger Train (APT) – the tilting high speed train developed by British Rail for the West Coast Main Line.

While the record was missed by just 21 seconds the collaborative efforts of Avanti West Coast and Network Rail enabled the nine-carriage Pendolino to travel at an average speed of 103 mph during the journey. The final time was clocked at 3 hours, 53 minutes and one second. 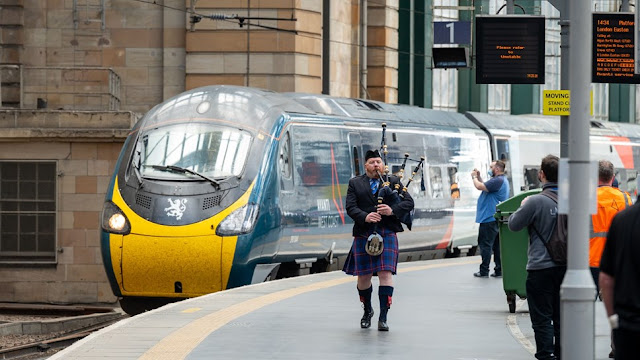 Today's run was the fastest ever by a Pendolino between London and Glasgow , breaking the previous record of 3 hours 55 minutes 27 seconds in 2006.

The charity event champions the ease of travelling between the home nations by train and the potential to boost connectivity between them in the future, as well as the environmental benefits of rail travel – the ordinary journey time (4 hours 30 minutes) for the 401.25-mile journey by train emits 24kg of carbon dioxide per passenger km compared with a plane journey of the same distance that emits 158kg per passenger km – saving 134kg of CO2 per passenger km.

The record run is the latest project to be carried out by Avanti West Coast and Network Rail. It follows the delivery of additional upgrade works while the rail network was quieter with fewer trains. These upgrades aim to make journeys more reliable as the industry welcomes back passengers.

Sir Peter Hendy, Chairman of Network Rail, said: “Today marked a brilliant collaboration across the railway industry! This this event shows how the clean, green railway of today can cement economic growth, jobs, housing and social cohesion through better connectivity across the United Kingdom. There will be more on better connectivity by rail and faster journey times between England and Scotland when I publish my final Union Connectivity Report for the Prime Minister in the summer.”

Steve Montgomery, First Rail Managing Director, said: “As we begin to build back better from the pandemic, the essential role of rail services in connecting our major cities and driving economic growth whilst combating climate change, has never been clearer. This record attempt shows how effectively rail can deliver cross-border connectivity.

Phil Whittingham, Managing Director at Avanti West Coast said: “While we’re disappointed we’ve not broken the record today, we are proud to have worked with industry partners to showcase the vital role rail can play in enabling cleaner, greener travel and connectivity across the United Kingdom.

“We want to connect people and places to opportunity, so we’re pleased to champion the railway’s part in this with our record attempt, while supporting Action for Children and Railway Benefit Fund whose work supports families and individuals along our route. The addition of Royal Scot to our Pendolino fleet highlights our commitment to connecting the nations we serve on the West Coast Main Line and we look forward to helping to deliver better Union Connectivity.”

Pete Waterman, President of the Railway Benefit Fund, said: “It’s a real privilege for the Railway Benefit Fund to be involved in this Record Run attempt. Time is of the essence for us all and every seven minutes somebody in our railway family reaches out to the RBF for help and advice. We are so thankful for the support of Avanti West Coast and Railway Magazine, which ensures we can continue to meet the increase in demand for our services and help the Railway family through tough times.”
Thanks to Avanti West Coast for information and photos