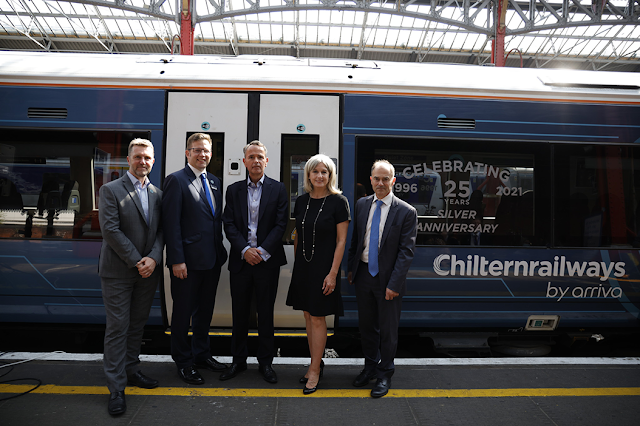 Chiltern Railways marked 25 years as a train operator with a celebration event at London Marylebone Station and the launch of HybridFLEX – Britain’s first battery-diesel train. Chiltern is currently an all-diesel operator with an average fleet age of 25 years. A key priority for the operator is to help deliver decarbonisaiton for the UK by investing in innovation.

Long-serving Chiltern colleagues joined the train to Bicester Village on its maiden journey. 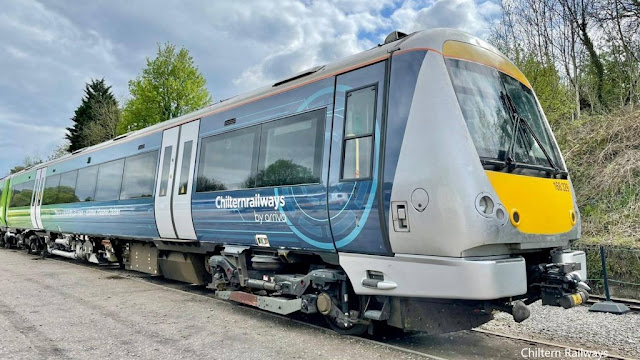 Following a programme of speeches, the guest were able to take a closer look at the HybridFLEX train before it departed from the station at 1030. The train then travelled to Bicester Village where there were further activities to commemorate Chiltern’s silver anniversary.

HybridFLEX is the product of collaboration between rolling stock owner and asset manager Porterbrook and engineering giant Rolls-Royce. As well as offering zero emissions and near silent operation at stations, the Rolls-Royce Hybrid PowerPack will also reduce fuel consumption and so CO2 emissions by up to 25%, Nitrous Oxide (NOx) emissions by over 70% and particulate emissions by over 90%, compared to the engines it replaces.

Chiltern is delighted to be trialling this new technology to demonstrate that it can contribute to better air quality, decarbonisation and the aim of removing traditional diesel trains from its network. The HybridFLEX aims to enter full passenger service from September this year.

“Chiltern Railways have connected people for a quarter of a century and now are helping to prepare for the future as we build back greener. This is a great example of how innovation and enterprise can help us reach our ambitious target of net zero emissions by 2050.”

Richard Allan, Managing Director at Chiltern Railways said: “Chiltern has a fantastic track record of innovating and investing in new routes, stations, depots and trains to attract and retain customers. We are proud and privileged to mark our 25th anniversary by introducing colleagues and stakeholders to the HybridFLEX train. We need to modernise Chiltern again and this exciting use of new technology in an older train is a potentially very significant opportunity to help us decarbonise and improve our customer experience."

Mary Grant, CEO of Porterbrook said: “We are delighted to be able to support Chiltern Railways’ ambitious plans for the future. Our HybridFLEX, built in partnership with Rolls-Royce, will offer improved air quality and reduced noise at stations and other sensitive locations on the Chiltern network.

Warren East, Chief Executive Officer at Rolls-Royce said: “This collaboration demonstrates the pivotal role technology is already playing in the transition towards a net zero future. With 1.7bn passenger rail journeys taking place every year in the UK, the 25% reduction in CO2 emissions offered by HybridFLEX represents a meaningful step forward in the country’s journey towards its 2050 net zero target. We’re delighted to be part of this ground-breaking team with our hybrid solution alongside Chiltern Railways and Porterbrook.”

The HybridFLEX train arrived on time, silently into Bicester Village station where guests were met with a warm welcome by colleagues from the Village.

A Bicester Village spokesperson said: “We congratulate Chiltern Railways on their 25th Anniversary. We are proud to join them in celebrating our long running successful partnership and welcome the exciting opportunities which they seek to introduce, in particular towards a sustainable transport future for Bicester”.

Over two decades, Chiltern has seen customer numbers grow from 8 million (1999) to 29 million (2019).
The company has invested over £600 million into the network over the past 25 years, including £250 million to speed up journeys between London and Birmingham.
Chiltern made a £320 million investment in partnership with Network Rail to open a new rail link between Oxford and London, the first new route connecting a city with the capital for 100 years - delivering faster and more frequent journeys.
New stations have been built at Oxford Parkway, Warwick Parkway, Aylesbury Vale Parkway and Bicester Village; restored a once-derelict Birmingham Moor Street station; and reconstructed Haddenham & Thame Parkway station.
New platforms have been constructed at Moor Street, Marylebone, Princes Risborough, Islip and Oxford.
The number of weekday services run by Chiltern increased from 240 to over 430 before the Covid-19 pandemic. 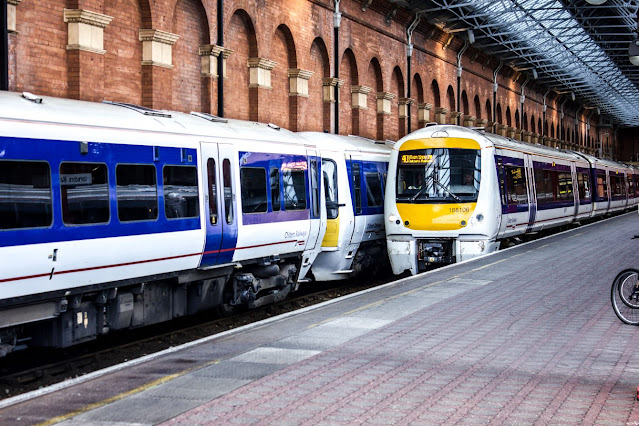 New Chiltern depots have been built at Wembley and Banbury to ensure reliable rail services.
Chiltern invested in a fleet of new Class 168 trains in 1996, the first order for new trains placed by any privatised train company.
Chiltern was the first operator to offer onboard Wi-Fi and first to have a presence on Twitter.