A fleet of 24-meter bi-articulated e-buses will be operating in France shortly.

Île-de-France Mobilités has turned to the ‘alliance’ between Van Hool, Kiepe Electric and Alstom for the delivery of a batch Van Hool Exqui.City vehicles which will operate on two new BRT lines.
The new vehicles combine the performance of a tram (frequency and reliability) with the flexibility of a bus at much cheaper set up costs, avoiding the requirement for rails and overhead lines to be laid. 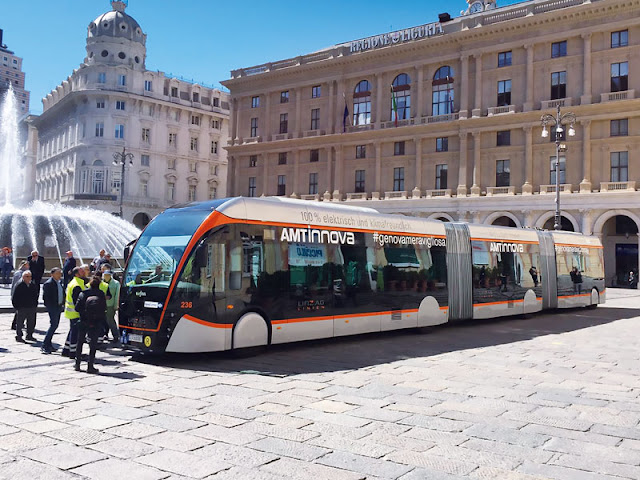 Each vehicle will have a capacity of up to 140 passengers. They will be the first 100% electric vehicles of such size in the Île-de-France. The number of vehicles to be provided has not been specified so far.
They will be charged via a ground wireless system, the SRS by Alstom, which is said to be a technological breakthrough in electric public transport, enabling city authorities to operate clean, quiet electric fleets without unsightly or obstructive catenary masts and overhead lines.
This is an added advantage for cities with exceptional architectural heritage or constraints such as narrow streets or bridges, where overhead infrastructure is unsuitable or unfeasible. The charging system can be used at stops and also at line terminuses, in particular for electric buses which can fully recharge in the space of a few minutes.
The two new Bus Rapid Transit (BRT) routes created and specially designed to accommodate such vehicles: the T Zen 4 line (Viry-Chatillon <> Corbeil-Essonnes) and the T Zen 5 line (Paris <> Choisy-le-Roi).
The T Zen 4 will replace line 402 on the section between Viry-Chatillon and Corbeil-Essonnes, which is currently the busiest route in the greater Paris area, with nearly 26,000 passengers per day.
The T Zen 5 is a new bus line that will link the 13th arrondissement of Paris to Choisy-le-Roi via Ivry-sur-Seine and Vitry-sur-Seine.

The buses by Van Hool – Kiepe Electric will be will be fully accessible to people with reduced mobility (PRM), thanks to their wide sliding doors and full low floor configuration
Van Hool Exqui.City vehicles are used in Belfast here and are planned for Walsall, Solihull, Great Barr & Birmingham Airport here