ATM Milano is expanding its zero-emission public transport fleet with new Solaris trolleybuses. An order for the supply of 50 Trollino 18 trolleybuses was signed in mid-November 2021. The contract is worth nearly €40 million.

The order for 50 Trollino 18 units, placed by operator ATM Milano, is an extension of an agreement signed in 2018, on the basis of which Solaris has already supplied 30 trolleybuses.

This is not the only contract to have been awarded to the Italian operator. In 2018 and 2019, a total of 165 Solaris Urbino electric buses were previously delivered. The low-floor, articulated Trollino 18 vehicles are extremely quiet and locally emission-free.
The units for Milan will be fitted with traction motors boasting 160 kW each and 45 kWh batteries.
The trolleybuses will be able to top up the energy in the batteries while driving, by connecting to the overhead power grid. Also, they will be able to drive a distance of up to 15 km without using the traction power supply.
This is particularly handy in the historic part of the city, or in the event of failure of the wires. The articulated trolleybuses will be able to carry up to 135 passengers, including 31 seated. Travel comfort will be ensured by high-efficiency air-conditioning.

The Milanese Trollinos will also feature an advanced surveillance system. It will consist of 10 cameras, including a rear-view camera, a 10’’ screen on the centre console and a data logger.
One of the elements improving safety standards will be the continuous monitoring of the insulation of high-voltage components from the chassis. Should any irregularities be detected, the system will automatically lower the current collectors.
The vehicles will also boast a passenger counting system. The first Trollinos covered by the new order will make their way to Italy at the end of 2022. 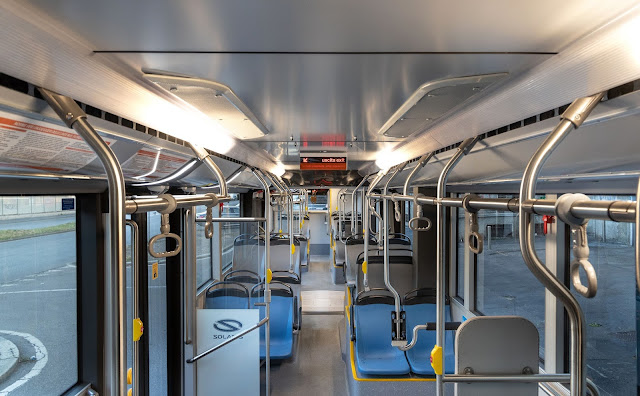 Alberto Fiore, Managing Director of Solaris Italia S.r.l said“We are very glad to enjoy such successful collaboration with ATM Milano, proof of which is the extension of the contract in question by another 50 Trollino 18 trolleybuses.
We are proud that zero-emission Solaris vehicles, of which there will be almost 250 units after the completion of the latest order, successfully serve the inhabitants of the capital of Lombardy and contribute to reducing exhaust gases and noise levels.
Milan’s large-scale investments in zero-emission vehicles demonstrate how seriously the city is taking the challenge of the green transformation of public transport. It is an honour for us to be a partner in this important undertaking”.
The partnership between Solaris and ATM in Milan began back in 2014. Since then, over 300 vehicles, including about 200 trolleybuses and e-buses, have rolled off the production line of the factory in Bolechowo and made their way to Milan. The Italian operator intends to completely forgo diesel buses in favour of locally emission-free vehicles by the end of 2030.