The first-ever trial of bio-coal in a full size, standard gauge locomotive has been described as a ‘milestone’ for steam.

The trials, featuring British Railways Standard ‘2MT’ 2-6-0 No. 78022, took place at the Keighley and Worth Valley Railway on Monday, February 14th 2022. They pitted a trial batch of Homefire Ecoal, developed by CPL Industries Ltd for use in steam locomotives, against the steeply graded, five-mile-long line in West Yorkshire.

The trials were the first on standard gauge locomotives with this new generation of fuels and the third in the series. The previous two trials were run in June and November 2021 at the Bure Valley and gave sufficient confidence to then progress onto the standard gauge. The trials are a collaboration between the Heritage Railway Association, member railways, CPL Industries Ltd and the Advanced Steam Traction Trust. The aim is to find an alternative to traditional steam coal, which is proving increasingly hard to source. 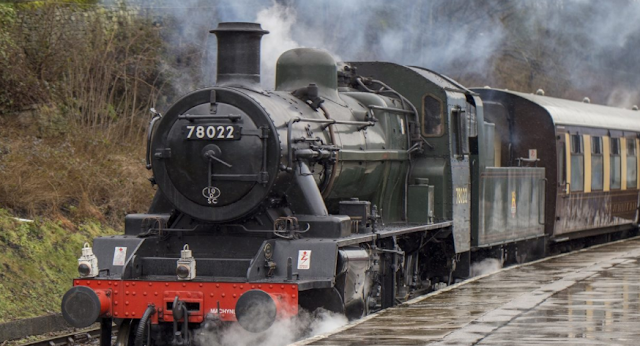 To closely replicate normal working conditions, a full operating day timetable was followed. The trial also used a rake of five carriages, the same that No. 78022 would be expected to haul using traditional coal.

The Homefire Ecoal blend has been carefully changed following the last steam railway trials, which took place in December 2021 at the 15in gauge Bure Valley Railway. The main aim of the KWVR trials was to prove the concept in a standard gauge locomotive and further refine the composition of the fuel.

Homefire Ecoal is produced at Coal Products Ltd UK plant and this was a unique formula featuring up to 20% biomass and manufactured using CPL’s hot cured process to provide greater strength and durability. The larger, specially-shaped hexagonal ovoid is designed to sit on both narrow gauge and standard gauge locomotive firebars just like traditional coal and is classified as smokeless emitting up to 80% less particulate matter (smoke) than traditional coal.

Heritage Railway Association Chief Executive, Steve Oates, said: “Even though this is just an initial trial, it is a significant milestone in the history of steam locomotives in the UK.

“Heritage steam is a small and very responsible user of high-quality, low emissions coal, but it’s clear that huge challenges are ahead for the fuel we depend upon. That’s why trials like this to find alternatives are so important.”

The urgency behind trials of alternative fuels has only increased in recent weeks after it became clear that the last source of UK-mined steam coal would no longer be supplying the heritage sector. There are now significant concerns that heritage rail could experience a coal shortage within months.

The requirements of heritage steam coal are very different to most other users. Factors like burn rate and the amount of ash produced are critical to success, but it is also important that fuel does not produce excessive smoke or damage to fireboxes and firebars.

Julian Martin, Sales Director from CPL Industries Ltd, said: “This is the first trial of our latest Homefire Ecoal product, designed for standard and narrow gauge locomotives. Previous trials at Bure Valley Railways and other railways have given us a great insight into what the driver needs to optimise the performance of the boiler, and it’s encouraging that a large number of steam engine users are already using Homefire Ecoal instead of traditional coal or other steam coals. 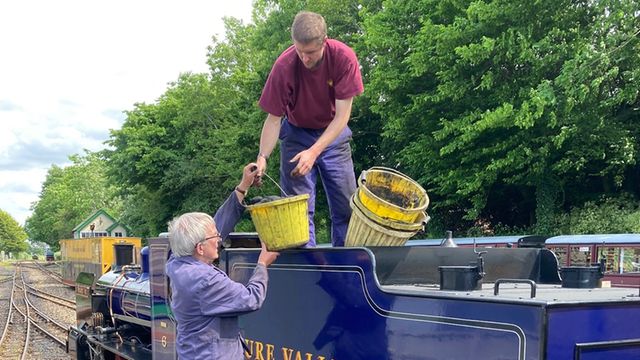 “The availability of coal for steam engines is already proving challenging and prices continue to increase. Unfortunately, it doesn’t look like this will ease in the near future as price and availability remain incredibly volatile. However, we are confident that we can produce a range of smokeless ovoids that meet the needs of all the steam engine users, which will be consistent in quality and performance and at the same time will be affordable and environmentally better to burn.”

With a 200psi boiler and a grate area of more than 17sq ft, 1954-built No. 78022 is by far the biggest steam locomotive yet to be trialled with bio-coal. The KWVR’s gradients of up to 1-in-58 also mean that locomotives need to perform well to keep to time.

Noel Hartley from the Keighley and Worth Valley Railway acted as a fireman on the day of the trials, he said: “It’s been really interesting to try it out, it’s very different to what we’d normally use. It’s a completely different technique, you’ve got to make sure you get it really hot to start with.

“I think in time, it could be with tweaks made really useful for heritage railway use.”

John Hind from the Advanced Steam Traction Trust said: “The trials are part of a development process. Every trial we do more and more is learnt and fed back to CPL Industries Ltd so that the heritage sector can be ready for a carbon-neutral world.”

It is planned to publish the results at the Heritage Railway Association’s Spring Conference in March.
CPL Industries, Producers of Homefire Ecoal, website here
Report on the earlier trials of Homefire Ecoal, carried out on the Bure Valley Railway here