QUANTRON, the German Augsburg-based company have launched an all-electric version (CIZARIS 12 EV), to be followed in 2023 by a fuel cell drive (CIZARIS 12 H)
The two vehicles use a largely identical powertrain. Both two- and three-door models with a total of nine interior layouts are available and will be offered in right hand drive.
The press release says "QUANTRON has 140 years of roots in the Haller Commercial Vehicle family business. The CIZARIS represents the entry of electric vehicle pioneer QUANTRON into the sustainable and tender-driven city bus market, which is becoming increasingly significant due to the European "Clean Vehicles Directive". 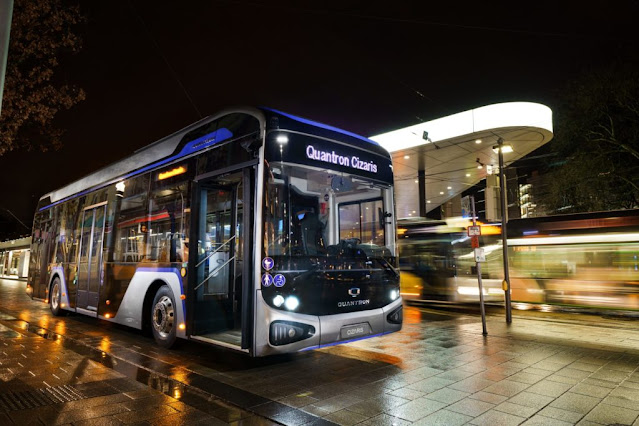 In doing so, the designers are drawing on a vehicle platform that has proven itself hundreds of times over in Asia's largest electric bus markets in recent years. At the QUANTRON plant in Augsburg-Gersthofen, the vehicles will be constructed to customer-specific adaptations, suited to the highly regulated municipal transport sector.
As the first QUANTRON model, the electric powered bus bears the evolutionarily enhanced QUANTRON lettering and the new logo. Both are clearly more modern and convey a high recognition value on the front (with logo), the rear and behind the A-pillar.
The modern driver's workplace is also emblazoned with a milled, high-quality QUANTRON logo. It stands for the combination of the three brand values "Reliable - Energetic - Brave". These values are also embodied in the striking three-part, intermittent "running light indicators" in the front, which are similarly installed in other QUANTRON models.

The front of the vehicle is visually appealing thanks to its low situated windshield, with large radii on the outside, leaving space below for the new logo.
The front and rear roof edges are clearly rounded and adorned with an additional "front shield", which takes away the vehicle's bulkiness and, in conjunction with the refined side graphics, gives it a distinctly three-dimensional impression.
The low-floor character of the bus is made clear by the black contrasting center section, while the roof edge trim at the front and rear puts the emphasis on the battery technology, which is hidden there on the roof outside any crash areas.
This allows 24 to 35 seats – in total, there is room for 81 to 95 passengers depending on the battery package – significantly more than many competitors.
The rear end with its large taillights, some of which are made of frosted glass or have a light-striped design, is also visually very striking and European. 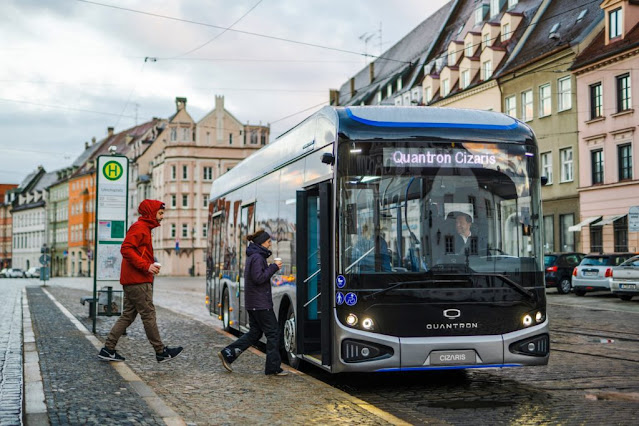 Light-flooded interior for up to 95 passengers

Access through two or three 1,200 mm wide doors makes it clear to the passenger that they are entering a truly spacious interior.  Wide passages between the axles or to the optional third door at the rear contribute to the airy and pleasant impression of space, as does the enormous headroom of 2,449 mm.
The front area up to door two is fully low-floor and very easy to clean thanks to the use of keel seats (with cantilever suspensions in the case of the individual seats). For the first time in this segment, the robust seat covers are manufactured using textile digital printing and feature the QUANTRON logo in the specially created parametric design pattern.
The colour scheme can be very easily adapted to suit needs such as those of people with limited mobility, making these seats instantly recognizable. A total of four seat configurations are available for the two-door model, and as many as five for the three-door model. 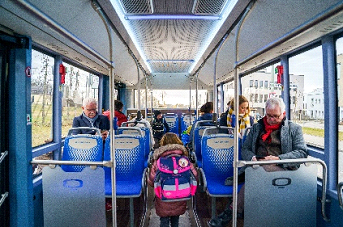 In the rear, the seats are mounted on pedestals, offering passengers a comfortable, elevated seating position on longer journeys. For short-distance hop on - hop off passengers, the seats mounted transversely on the compact engine box directly opposite door are ideal.
Optionally, a large luggage rack can also be mounted here, for example for airport buses. A highly efficient Valeo heat pump/air conditioning unit with a cooling capacity of 33 kW provides the right climate on board.
Thanks to the advanced principle of "Positive Temperature Coefficient Heating (PTC)", the total heating capacity can be increased to a total of 50 kW if required. The process enables an effective heating output adapted to battery operation with lower energy consumption.
Antiviral filters as well as a closed driver's cab are among the possible equipment options adapted to the respective countries.
A special highlight in the interior is the elaborately perforated aluminum ceiling with indirect side lighting and additional LED lights mounted transversely to it, the color of which can be changed on request.
This quickly creates the dignified atmosphere of a touring car, especially in the evening and at night. Modernity also reigns when it comes to USB charging: either the standard sidewall-mounted USB-A plugs or the optional USB-C plugs under the comfortable seats are available. 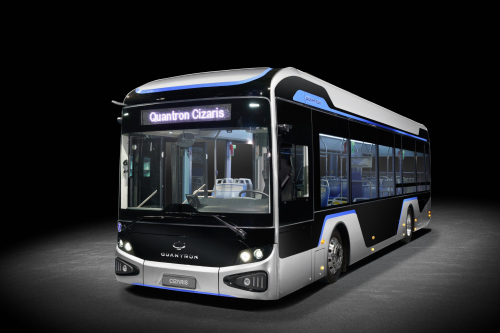 The driver's workplace of the CIZARIS is mounted on a raised platform from which the driver meets his customers at "eye level," each driver finds the optimal position on high-quality and versatile adjustable seats from Isringhausen or Grammer.
The easy-to-grip steering wheel with the new brand logo, but without buttons that can distract in city traffic, can also be adjusted in two directions.
A VDV-compliant version currently in planning will even be fully adjustable. The basic principle of the cockpit could be summed up as "less is more": the very functionally designed panel with large monitor for rear view camera has very few buttons.
On the right of the steering wheel is the recuperation lever, which can be used to select the power of the brake energy recuperation in three stages. The high-resolution camera mirror monitors are mounted directly in front of the A-pillars, where they cut down little field of vision.
The CIZARIS is one of the few city buses to also offer a separate nose observation camera with a large monitor above the cockpit. That's why the electric bus is also equipped with the latest electronic safety systems such as ABS/ASR, EBS 5.0, ECAS from European production, and the turn-off assistant from Mobileye can also be retrofitted on request.
Stabilizers on the front and rear axles ensure high safety and comfort on board. And optimum fire protection is ensured in the rear compartment, in the battery modules and other high-voltage components by means of fire detectors (temperature/gas sensors) and separate powder extinguisher cartridges - even though the LFP batteries are considered by all experts to be largely "incombustible". 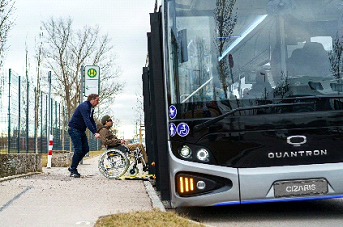 QUANTRON relies on the combination of robust and reliable lithium iron phosphate batteries and highly efficient synchronous central motor from Dana/TM4, which has been used in many thousands of buses for years.
From QUANTRON's point of view, this combination, which has so far been somewhat rare in Europe, represents the optimal team for converting the energy on board into propulsion as safely and efficiently as possible.
With between 242 and 424 kilowatt hours of selectable battery capacity, the roof-mounted battery packs only (a maximum of six in the front and six in the rear depending on customer preference) are fast-charged by CATL with 65 to 150 kW direct current (DC) in two to five hours.
The matching CCS combo charging plug is installed on the right, left or in the rear at the customer's request - a key point in terms of customer convenience.
In the medium-heavy eSORT 2 cycle, this energy is sufficient for circulations of 220 to 370 kilometers with a charging stroke (DoD) of 10 percent.
This range is fully sufficient for most transport operators, saving them greater expense on charging infrastructure. For higher demands, the CIZARIS 12H will have even greater range for intercity travel starting in 2023. The CIZARIS is not only efficient but also easy to maintain - a foolproof and highly reliable electric bus.

The vehicle-mounted and water-cooled central motor from Dana/TM4 based on the permanent synchronous principle (PSM) is appealing due to its low speeds and particularly high efficiency compared with asynchronous motors.
It has an output of 145/245 kilowatts (nominal/maximum) and a maximum engine torque of 1,055/3,329 newton meters, which is developed without any gear changes. With the introduction of the fuel cell version, an even more powerful powertrain will be used.
Another advantage of the central engine, in addition to its largely silent operation, is that since it does not contribute to the unsprung masses of the chassis like an electric portal axle, it is not exposed to constant vibrations and thus has a longer service life than such systems. 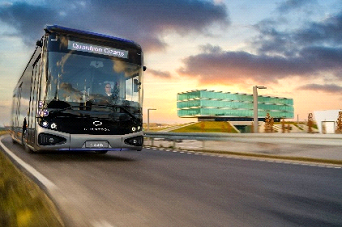 Service and warranty from a German full-line provider

An electric bus is only as good as the service you buy with it. QUANTRON does everything in its power to help the customer configure the vehicle and analyze its routes and electrical equipment as early as the purchasing process with its experts.
This is because the battery size in particular must be precisely adapted to the requirements so that people really are moved instead of unnecessary battery mass.
The basis for a long bus life is a complex cataphoretic dip painting of the frame (KTL) and other effective corrosion protection measures. A central lubrication system on the front axle ensures optimum maintenance. 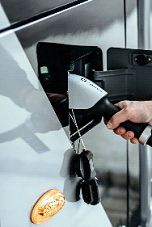 The warranty terms are basically two years for the entire vehicle, and eight years or 3,000 charge cycles (or 80 percent charge capacity - whichever comes first) for the all-important batteries - extensions or service contracts can also be offered on request.
Re-use options for batteries at their end of life can also be offered by QUANTRON.
In total, QUANTRON has a network of 700 service partners in Europe, many of whom can also service electric buses. In a multi-stage service concept, it is checked in each case whether the customer's workshop can be upgraded to work largely self-sufficiently with the support of QUANTRON technicians.
The connectivity of the buses is ensured by the FMS 4.0 interface, and the use of QUANTRON's partner telematics CAPTE or VinCity is also currently being examined in order to be able to remotely retrieve the essential data of the bus, proof of which is also required for public funding, at any time.

For the initial market launch of the QUANTRON CIZARIS, the sales focus will initially be on the markets of Eastern Europe, the Middle East, Scandinavia, and Southern Europe.
Due to the special requirements of the German market, such as the VDV specifications relating to the driver's workplace and other systems, the market launch in Germany, Austria and Switzerland will take place in the second half of 2022.
A right hand drive version is also planned.