The double-deckers were on show at City Park in a special ceremony attended by senior directors of First West Yorkshire and Cllr Susan Hinchcliffe, Leader of Bradford City Council and portfolio lead on transport for West Yorkshire Combined Authority.
The ultra-low emission buses, 28 double-deck Wright StreetDecks and 11 single-deck StreetLites fitted with Euro VI engines are manufactured by Wrightbus, and feature best-performing Euro VI diesel engine technology which achieves significant reductions in the most harmful pollutants, such as nitrogen oxide, making the buses 95 per cent cleaner than some they are replacing.
Carbon reduction is also achieved by the engine technology and lightweight build compared to older generation vehicles. 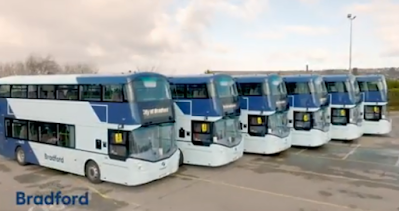 The vehicles, branded City of Bradford, are part of a total fleet of 28 double-deckers to be introduced in the coming weeks on the X6 and 72 services between Bradford and Leeds.

A further 11 single-decker buses will be added in the summer to operate on routes within the city. 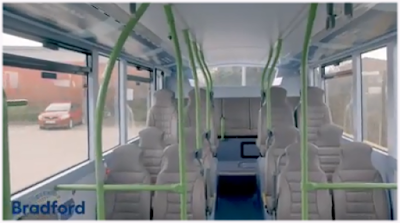 Paul Matthews, Managing Director, said: “This is a significant day in our long-term vision to upgrade the fleet to give customers a better travel experience and play our part in achieving major improvements to air quality in the Bradford city region.

“Our new buses are fitted with the latest on-board features to provide connectivity on the move, better journey information while travelling and greater comfort.

“Buses are key to tackling congestion and reducing emissions. A fully-loaded double-decker bus can take 75 cars off the road.”

The new buses will boost support from First’s citywide fleet to comply with the Bradford Clean Air Zone, set to be introduced this spring. Existing vehicles on the X6 and 72 routes, which are also Euro VI, will be cascaded to other corridors across Bradford and the operator has completed the retrofit of 99 buses with replacement exhaust systems to meet the highest diesel standards with only a few remaining to be converted.

Cllr Susan Hinchcliffe, Leader of Bradford Council said: “It is great to see the investment that First West Yorkshire have made to ensure that their fleet will contribute to reducing pollution and improving air quality in the district.

“We are proud to be working with all Bradford bus companies and providing grants for new buses and retrofits to meet clean air zone standards.

“Bradford Council has worked with the West Yorkshire Combined Authority (WYCA) to facilitate the upgrade over 300 buses to meet Clean Air Zone standards and is also supporting current Zero Emission Bus Fund applications by Transdev and Arriva which will hopefully see 40 electric buses coming into service in the district next year.”
The StreetDeck series incorporates the latest features in bus travel, including next stop audio announcements, USB charging points, free Wi-Fi and superior e-leather seating.

Paul Matthews added: “Improving air quality in Bradford is a huge priority and this investment in ultra-low emission demonstrates our commitment to work in partnership with the local authority.

“Road congestion continues to be one of the biggest issues facing bus services, It’s important that we continue to work with the city council and other bus operators to encourage less car usage across Bradford and entice more people to travel by bus.”