The Spa Valley Railway Summer Diesel Gala 2022 has three visiting locomotives with class 24, 25 and 73 paying a visit to Tunbridge Wells West, an intensive train service and as many of the home-based locomotives in action as possible.

Class 24 D5054 'Phil Southern'
Visiting from the East Lancashire Railway is Sulzer Type 2 D5054, built in 1959 at Crewe. D5054 is one of just four preserved examples from the original 151 strong fleet of locos and was amongst the first Diesel locomotives to be based at the East Lancs Railway, Bury, arriving in 1987. D5054 is visiting for the month of August and will be the first time a Class 24 has visited the Spa Valley Railway in preservation, previously classes 25, 26 and 27 have all visited Tunbridge Wells West.

Class 24s are no strangers to the Southern region with fifteen of the initial twenty were diverted for use on the Southern Region to cover for delays in the Kent Coast Electrification scheme. Here the heavy weight was not acceptable and the locos in question had to have their boilers removed before they were accepted. Later some locos had their boilers re-fitted and these examples could be found, often in tandem with a Class 33 to provide steam heating to the coaches, the 33s only having electric train heat (ETH).

Coming all the way from Devon is Sulzer Type 2 D7535, built at Derby Works in 1965. This locomotive is based at the South Devon Railway and owned by South Devon Diesel Traction and D7535's holiday follows on from other SDDT locomotives including Class 25 D7612 and Class 33/0 33002 ‘Sea King’ visiting Tunbridge Wells. SDDT has supported Spa Valley Diesel Gala's since their early days supplying the first visiting locomotive at Spa Valley. Class 20 20118 in 2006!
D7535 is currently undergoing testing following major work to the engine, in the event the locomotive is unavailable Class 25 D7612 will substitute.

Making a welcome visit to Tunbridge Wells West is a GBRf Class 73/1 (number TBC). This locomotive usually sees service on the mainline around Kent and Sussex out of Tonbridge West Yard and is owned and supplied by GBRf who have previously supported the diesel gala in 2017 with the visit of Class 73/1 73136. The 73/1 will also feature at the Spa Valley 25th Anniversary Gala from 26th to 29th August. 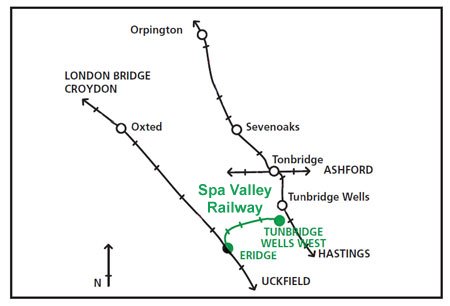