The rain came but certainly didn’t dampen spirits at the inaugural WythallBusfest@Gaydon on Saturday July 2nd. With 100 buses entered along with over 750 visitors and 25 sales stands, the event is now firmly on the map and already booked again for July 1st 2023.

Fuzz Townshend, presenter of TV’s CAR SOS restoration show, long-time bus enthusiast and owner of West Midlands Travel Fleetline 3913, unable to formally open the show outside, instead took the microphone to tell us about his early life in the bus industry.


The two 50th anniversaries – the Leyland National bus and National Express coaches – were well supported and augmented by lively presentations, questions and answers by senior members of the original Leyland development team and Dr Peter Robinson on the history of National Express respectively. NX was well represented by a sales stand inside the museum showing a video history of the brand and NX West Midlands brought along four of its heritage liveried fleet plus a new electric Alexander Dennis Enviro 400.

Outside in the heavy rain where 75 buses finally made the day, nine Leyland Nationals were on display including REV01, an early prototype making the long journey from Workington without missing a beat, Wythall’s Midland Red Mk1 and West Midlands Travel Mk2. Eight NX coaches represented the history of this iconic brand including two Leyland Leopards and the very latest Caetano Levante III.

Wythall’s Midland Red CM6 Motorway Express Coach was also on display, the vehicle having run in all-white livery for a number of years. A wide cross selection of buses and coaches from across the decades filled the display areas with variety and interest including Wythall’s latest restoration, 1931 AEC Regent, Birmingham City Transport number 486. 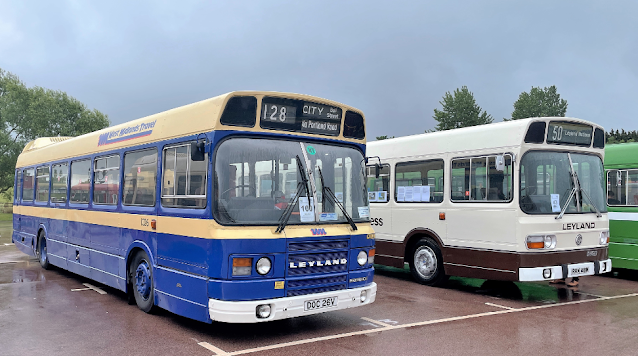 Unfortunately the planned running of two ride routes, on and off site, was severely hampered by the appalling weather, very much out of the control of the organisers, but the major advantage of the British Motor Museum is that all visitors were able to enjoy an extended opportunity to visit the sales stands, join the presentations, view the amazing collection of historic British cars and take refreshment away from the deluge.
In true British fashion, as everyone began their journeys home, the skies cleared and the sun came out.

Despite the weather setback, this new event will become an annual fixture so put July 1st 2023 in your diaries now and we will start working on the weather gods! We look forward to a more clement, sunny day in 2023!

The Transport Museum Wythall team wish to express their thanks to all buses, coaches and sales stands that joined the event, to Fuzz Townshend for opening the show and joining us at the microphone, the speakers for both anniversaries and to the enthusiasts, National Express for its support and members of the wider public who braved the elements, not forgetting our partners and staff from the British Motor Museum.