Stagecoach bus drivers have picked up the top three awards in this year’s Bus Driver of the Year National Final.

Michael Evans, who works at Porth depot for Stagecoach South Wales, was crowned as UK Bus Driver of the Year 2022, beating off stiff competition from bus drivers right across the country. Michael has worked for Stagecoach for five years after he changed career from a car salesman. 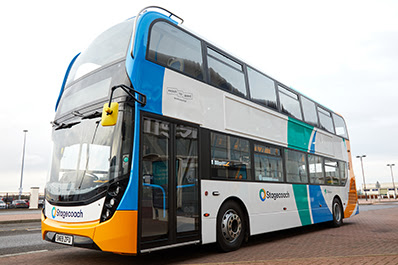 Martin Griffiths, Chief Executive of Stagecoach, said: “We are very proud of Michael, Anthony and Ian for their well-deserved wins at this year’s Bus Driver of the Year awards.

“Our teams work incredibly hard to deliver the best possible service for our customers and make a huge contribution to keeping communities connected right across the UK, often in some challenging circumstances.
Being recognised in the Bus Driver of the Year national final is a fitting celebration of their achievements, and our congratulations go to all of the drivers named in this year’s awards.”

The awards were presented at the 54th National Bus Driver of the Year Final, which was held in Blackpool on Sunday 2 October. As part of the awards, the drivers each have to do a theory and driving test.
The awards attracted nominations from 89 bus drivers across the country representing 35 large and small bus operators. Winners are presented with a sum of prize money and a trophy by Tom Cunnington, Head of Business Development at Transport for London.

A number of other Stagecoach bus drivers were named in the awards including Brian MacKie from East Scotland who won a fifth place award and also won the ‘best theory test result’. In addition, in the recognition for best-presented buses, the category for those between one and five years old was won by Stagecoach West; and for those over five years old jointly won by First Potteries and Stagecoach Cumbria.